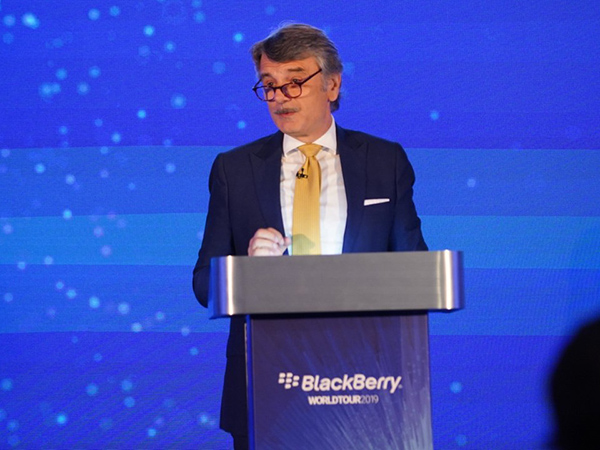 Our CEO Prof Sir Ralf Speth offered over 500 business leaders and IT decision-makers attending a major summit in London an insight into how Jaguar Land Rover is working alongside partners including BlackBerry to deliver safer, more secure and intelligent vehicles for our customers.

Our CEO was a keynote speaker at the BlackBerry World Tour event which focussed on global cybersecurity issues and explained how Destination Zero - zero accidents, zero emissions and zero congestion - was central to Jaguar Land Rover’s product development plans and future success.

However, to achieve Destination Zero’s goals our vehicles will need even more powerful in-car systems (often connected to the wider digital world) and the huge amount of information the cars will use has to be secure. Prof Sir Ralf Speth explained:

“A security-first approach is essential at every level of our vehicles - in manufacturing, in the integration of new technologies and also the user interfaces that inform drivers and passengers inside the car. And we can’t get to Destination Zero without cybersecurity.”

Our CEO used the example of the new Land Rover Defender, explaining that whilst the vehicle has always been hugely admired for being robust and doing the extraordinary in the toughest places, the latest Defender is also equipped with 85 Electronic Control Units that can handle an astonishing 21,000 network messages at any one time.

“The Defender is an off-road super computer. Its sophisticated programming manages engine performance, evaluates and adjusts driving performance and also provides drivers with better visual awareness of the world around them,” Prof Sir Speth explained.

However, with future models predicted to feature even more advanced Electronic Control Units (in addition to receiving greater data so drivers have precise, real-time information) there will also be a need for tougher cybersecurity. He added:

“As we innovate further, especially into self-driving vehicles, which could use as much as a billion of lines of code, an over-sophisticated operating system could increase costs and also open new angles for a cyber attack.”

Touching on Jaguar Land Rover’s technology partnership with BlackBerry our CEO highlighted how the company was already making big strides on the security front.

Jaguar Land Rover use three advanced products from BlackBerry and this  includes a state-of-the art scanning and analysis tool ‘Jarvis’ which reviews software from our suppliers by reviewing code quality and red-flagging any issues that might potentially threaten cybersecurity.