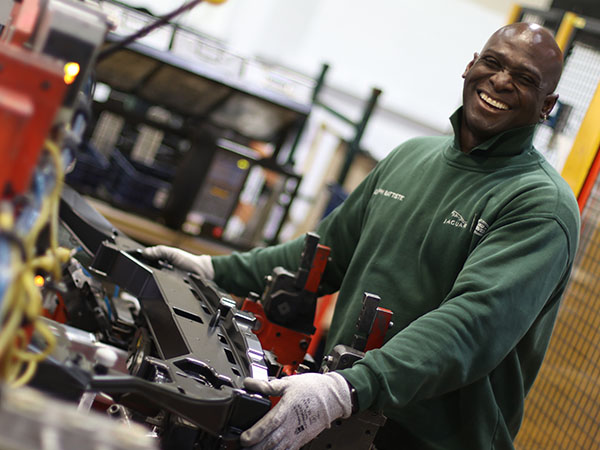 For most of us when we watch TV it encourages us to buy new shoes, book a holiday or pick up the latest gadget but for C Block associate Joseph Battiste it moved him to help those less fortunate.

The 52-year-old, who works on the framing line, was watching the telly one day when, as part of a show he was watching, he saw an appeal from an Afro-Caribbean man with blood cancer who was struggling to find a stem cell donor which could give him a second chance at life.

It was this appeal that spurred Joseph into action and now, after several tests, he has now been confirmed as a potential stem cell donor who could help save someone’s life.

This all sounds fairly common, people make medical donations every day. It’s not until you look at the numbers that you see just how important Joseph’s donation could turn out to be.

Only 20 per cent of Afro-Caribbean patients end up being eligible to receive the benefit of donated stem cells because of sickle cell anaemia, a condition that affects one in every ten Afro-Caribbeans.

The fact that only three per cent of the Afro-Caribbean population in the UK choose to donate makes the problem worse because of the low level of compatible donors of a similar ethnicity and it’s because of this that Joseph chose to act.

The dad-of-two has worked in every one of Jaguar Land Rover’s manufacturing sites during his 23 years with the business and he says a number of things that have happened to him over the years that have seen him get support from others as well as the support and opportunities he’s been given by JLR made him feel as though it was time to give back.

“Certain people have been so kind to me throughout my life in giving me help and support when I needed it, Jaguar Land Rover has always looked after me, so how can I look at somebody that needs help and then do nothing,” he said.

“What I want to do as well though is raise awareness of the shortage of ethnic minority stem cell donors and hopefully encourage others to think about doing the same.”

Joseph, who celebrated his 53rd birthday last month (Happy Birthday!),has received a letter from non-profit donor bank DKMS who have not only confirmed he is an eligible donor after some early blood tests but also that there may be a specific patient who could be helped.

If a final match is confirmed he will have a procedure which draws bone marrow from his pelvis which will be used to extract stem cells which can be transferred to a patient in need.

“I’m not a quitter,” he said, “and I’ll not go back on my word to do this. I’ve been so grateful over the years for the way that people have helped so if I can do the same I absolutely will.

“I don’t know if I’d be able to meet the person who would received my donation although if I could it would be great.

“In the meantime I just have to sit and wait for a phone call to say that I need to head to the clinic to make my donation. Everyone here’s also been so supportive of this, my workmates, my managers, they’ve all taken the time to come over and say they’re full behind what I’m trying to do.”

If you’ve been affected or moved by Joseph’s story and want to do something contact NHS Blood & Transplant on 0300 123 23 23 or by visiting www.nhsbt.nhs.uk/british-bone-marrow-registry/how-can-i-help/

“Certain people have been so kind to me throughout my life in giving me help and support when I needed it, Jaguar Land Rover has always looked after me, so how can I look at somebody that needs help and then do nothing"