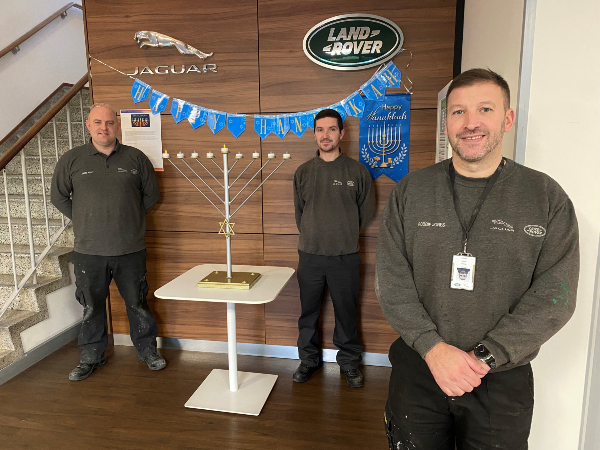 MAGNIFICENT MENORAHS MADE TO MARK HANUKKAH/ CHANUKAH AT HALEWOOD

Sunday 29 November was the start of the eight-day Jewish holiday of Hanukkah, also known as Chanukah, so to mark the occasion, the R.E.A.C.H network and Halewood Inclusion Council have pulled out all the stops to decorate our foyer area…. with a “little help from our friends” in the Body Shop.

Jay Kelly, Michael McIntyre and Robbie Jones, who work in the Kaizen team on A shift, used the recent non-production week to create two magnificent menorahs which they fabricated from surplus metal-which would have otherwise been scrapped.

A menorah, or hanukkiah, is a nine-branched candelabrum which is lit during Hanukkah, also known as the Festival of Lights.

Talking about their project, Jay said: “It’s been fantastic to get involved in something outside the day job where we have been able to draw on our skills as trained welders to create something special, which can be used to mark Hanukkah at Halewood for many years to come.”

Asked how they made the menorahs, Michael said: “We did a lot of research as we wanted to get everything right and, in the process, learnt a lot about the Jewish culture which was insightful.

“We had seen menorahs before but didn’t realise that each candle represented each of the eight days of the festival and that the ninth branch holds a candle called the shamash which is used to light the other eight.”

Robbie said: “What also makes the project special is that there is a great sustainability element to it as we made the menorahs out of surplus metal, which would have otherwise gone to scrap.

“It cost us nothing to do but the experience itself was priceless as it gave us the opportunity to learn about something new and use our craft to make something really unique for our employees."

Hanukkah, also known as Chanukah, is a Jewish holiday which celebrates the rededication of the Jewish Temple of Jerusalem during the second century B.C. This followed the triumph of a small group of Jewish rebels, known as the Maccabees, against their oppressors the Greek-Syrians, who had defiled the temple. The Hebrew word ‘Hanukkah’ means ‘dedication.’ Also known as the ‘Festival of Lights’, Hanukkah additionally celebrates a miracle that happened during this time.

In order to rededicate the temple, the Maccabees had to light a menorah – a candle stick - that should have burned within the temple at all times. However, they only had enough pure olive oil to last for one day. Miraculously, the oil burned for eight days, leaving time to find a fresh supply. Today, like winter holidays the world over, Hanukkah emphasises light and fun during the darkest part of the year and celebrates victory of the underdogs over their dominant oppressors.

When does Hanukkah take place?

Hanukkah starts on the 25 Kislev in the Hebrew calendar and lasts for eight days. The timing of Hanukkah in the Western/Gregorian calendar changes every year, although it always falls in November/December. In 2021, it will be held from sundown on 28 November through to sundown on 6 December.

How is it celebrated?

Hanukiyah  is celebrated for eight days to mark the eight days the oil burned. People celebrate Hanukkah by lighting candles on a menorah (a nine branched candlestick), which is also called a Hanukiyah. Each night, an additional candle is lit and many families sing Hanukkah songs after the lighting.