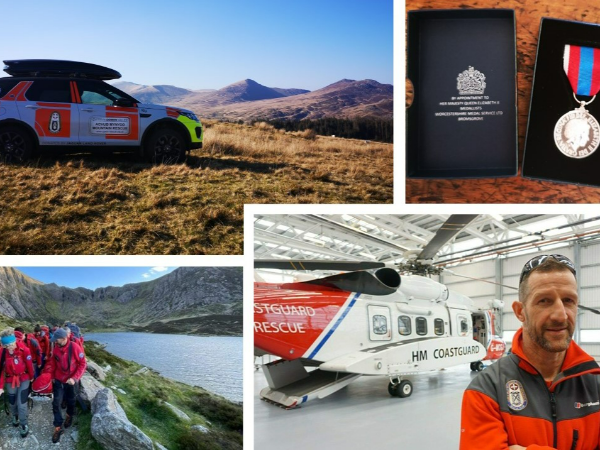 A huge congratulations to Martin Wall - our very own Halewood royalty - who received a Queen’s Platinum Jubilee Medal during Whit shutdown.

The medal was specially commissioned by the Royal Family to mark Her Majesty’s spectacular 70-year reign, and is being awarded to serving frontline members of the police, fire, emergency services, prison services and Armed Forces.

Martin, who works in BIW Manufacturing Engineering, was recognised for his long service and commitment to Ogwen Valley Mountain Rescue team, which he joined as a volunteer, in 2015.

During that time, Martin, a former Reservist in the British Army and qualified rock-climbing instructor and mountain leader, has attended over 150 rescues.

He is also an emergency casualty carer and rope rescue technician so can perform emergency first response lifesaving functions and administer pain relief to stabilise casualties, directly at the scene of an accident on a mountainside or cliff face where access by any other method is just not possible.

Talking about receiving a Queen’s Platinum Jubilee Medal, Martin, said: “It was 3.45am when I found out. I had just returned to the rescue base following an eight-hour, overnight, technical rope rescue, which the rescue helicopter was unable to support due to the bad weather conditions so I just felt incredibly proud to be recognised by Her Majesty.

"Having the opportunity to rescue someone who is injured or in danger, making use of the 25-plus years' mountaineering skills I have acquired to make a difference to that person and their family, is a very unique opportunity. That's why I love being part of the response team on top of my day job at Halewood."

Martin added: “Our factory also has a special link to Ogwen Valley Rescue as the response team drives a Land Rover Discovery Sport which was donated through the MOTORVATE employee scheme, which rewards good attendance. And with Jaguar Land Rover being a Royal Warrant holder – receiving the medal and representing Halewood and Ogwen Valle Rescue Team seems very fitting.

Acting as a token of the nation’s thanks, the Platinum Jubilee Medal follows a long history of awarding medals to mark Royal Jubilees, with the first one awarded to mark the 50th anniversary of Queen Victoria’s reign in 1887.