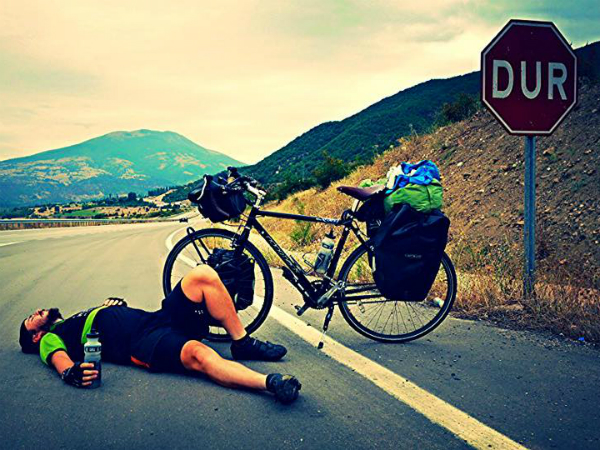 Like Clark Kent, Andrew Rogerson has a dual identity. Most people know him as a down-to-earth guy from Halewood who used to be a plumber until he joined Jaguar Land Rover where today he works as an electrician on the Off Track. However when you ask him about his “other persona” Andy is adamant he is no superman, but just a normal guy who loves embarking on outlandish adventures to raise money for sick children.

To his friends, family and colleagues – in particular Robbie Fearns whose son Charlie’s battle with leukaemia was the inspiration behind Andy’s now infamous fundraising escapades - he is the ultimate superhero known as the “Cycling Scouser”.

But who is the Cycling Scouser? As he prepares to get ready to set off on his next adventure – cycling from Seattle to New Jersey in early July to raise money for JLR’s Charity of the Year Charlie’s Chance, we met up with Andy in his civilian guise to find out more about the man behind the bike.

Have you always been someone who airs on the side of adventure?

No, I was never adventurous at all to be honest. I never had a particular interest in travelling or doing anything to the extreme when I was growing up in Halewood. That all changed in 2010 when I met Robbie Fearns on the shopfloor and heard about the bone marrow transplant his son Charlie needed. We did a collective climb up Kilimanjaro to raise money and then I decided to climb Mount Elbus, rode across Vietnam, hiked to Machu Picchu, cycled from Shanghai to Liverpool and completed five marathons in five days in the Jordanian desert. It’s fair to say I have the travelling and adventure bug now – I go away about ten times a year and I am always thinking about my next challenge.

What’s been your favourite experience so far?

Cycling through Iran. It was fascinating to experience the real cultural differences but the people were fantastic. They are so generous and treat visitors as guests they were so kind to me and I experienced amazing hospitality – this one guy even got the Liverpool match on for me in his home holding the aerial to ensure a good signal as well as plying me with bootleg rum!

However crossing the border between Iran and Eastern Turkey proved to be the most hostile welcome I have experienced. Sadly, I arrived on the eve of the anniversary of the first Kurdish terror attack. Every year at this time, more attacks occur, so it was a high-risk place to be. My second day in Turkey was a real low point – within one hour I had already been held up at gunpoint. Later, two shepherd boys tried to knock me off my bike beating me with their sticks. I was also chased by wild dogs!

Tell us about your upcoming America challenge

In July I’m embarking on the second leg of my round the world challenge, I have 42 days to get across America to catch my flight home.  Starting Monday 2 July at Seattle Children’s hospital and finishing at Jaguar Land Rover’s US HQ in New Jersey – which is over 3000 miles. All to raise money for Charlie’s Chance Foundation. This one is a real race to keep on track timing wise. I have to cycle over the Rockies where I may meet stray cougars, bears and wild mountain lions! I’m using the same bike as last time, the same seat and everything. I’ve just splashed out £200 on it to get it back into shape so I hope it holds up!

To learn more about Andrew’s America Challenge and make a donation visit: https://www.justgiving.com/fundraising/cyclingscouser

See the full interview in this months People Talk Monthly!