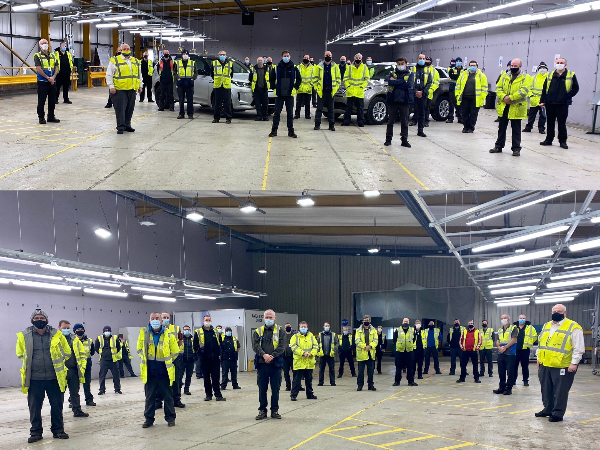 MEET THE DREAM TEAMS IN BATCH AND HOLD

Last Thursday, Halewood plant director Trevor Leeks and Plant Launch Manager, Graham Miller, hosted a special recognition gathering for the teams working in Batch and Hold, for the incredible work they have delivered since the relaunch of the Evoque, over two years ago.

Batch and Hold is a launch initiative put in place to ensure Halewood maintained the highest levels of quality during the switch over to the new car, move to PHEV and 21 Model Year. Between them, the teams have had nearly 20,000 cars pass through their department and done more than 60,000 upgrades.

Dave Sandford, Product Coach, said: “We all feel quite sad today as it’s an end of an era, as we’ve spent the last seven years working together and have learnt so much. It’s been a real challenge, especially with the complexities involved switching to PHEV and then 21 Model year but the teams have constantly adapted and have been effortless to manage.”

Jon Buckley, Launch Supervisor and engineer, said: “It’s been an honour to lead a team that just got on with the job in hand and took every challenge that came their way on the chin.

Jon added: “It’s not been easy and Jay Clarke, one of our teammates has been in hospital since November. Jay has been really poorly and that’s been hard for us all. He played a huge role in the team and put a lot of effort into getting cars through the Off Track, so we have really missed him.

“He is getting better and has been texting today to wish us well, so we would like to take this opportunity to thank him and let him know that he is with us in spirit as we celebrate this milestone today.”

Graham Miller, said: “This is a relatively small team, I’m incredibly proud of Garry Watson, Paul Ingram and their teams who have got through this volume within such a short time frame. It’s an astonishing achievement and a real credit to everyone who played a part in this incredible journey.

“From checks to systems upgrades- they have done it all and have worked tirelessly to achieve incredible levels of improvement to the process so that there was no adverse effects to the quality of our cars. The same team have also ensured that, regardless of the work content, the cars were released in line with the original sales plan, giving our valued retailers the best opportunity to satisfy their customers.

“This means we have nearly 20,000 happy customers that have received their cars that have been delivered on time to the highest possible quality standards- something we should all feel very proud about.”

Well done everyone and all of us at Halewood wish Jay a speedy recovery.