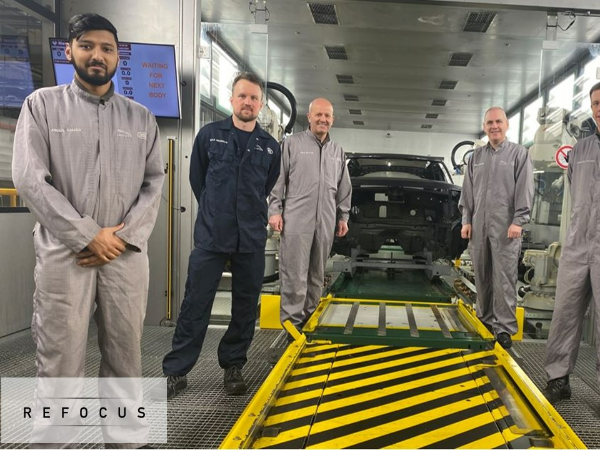 MEET THE TEAM PUTTING HALEWOOD ON THE (JLR) MAPS!

A team from Halewood has created a new agile maintenance planning system which has transformed the way our engineers access job requests saving money and trees!

It comes as no surprise that this creative cross functional team from Paint Shop and Body Construction Maintenance has been named amongst the top five winners of the JLR Innovation Challenge and will be treated to a terrific trip to Hanover later this Spring.

Together Abdus Samad, Tom Woods, Christian Holding, Dale Nicholls and Dave Buxton designed JLR MAPS, an acronym which stands for Maintenance Agile Planning System and for the first time ever, this will allow our engineers to access their job requests electronically, rather than having to print them out on paper forms.

They created the system through Power Apps so it has cost the business nothing but will save Halewood alone over £88,000 a year in printing costs, 325,000 sheets of paper and the team estimate that if applied to all manufacturing sites, could save JLR up to £237,000.

And the savings don’t stop there as by creating the new system in-house, Halewood has avoided the need to purchase an external maintenance planning system such as SAP PM, which would have cost the business £173,000.

Dale Nicholls, Group Leader from Maintenance, said: “I know how hard the old paper system was to use as you had to print out and schedule in the requests yourself and you got no return from it. You couldn’t see how you were performing which was demoralising and there was no way of measuring the value of your work.

Dale added: “That’s all changed now as it’s all on a dashboard with Power Apps so it’s engaged the teams and improved performance as they can benchmark themselves against their own work, other shifts and categories.”

JLR Maps also allows users to get live updates on the status of their maintenance requests and has an integrated digital sign off function for the maintenance engineer, so they can use their ID cards to sign into the system to pull off their requests, rather than having to print off a form.

It also gives supervisors visibility of all the jobs in their department, so that they can assign extra labour resource to a task if required.

In the first of its kind, all the team undertook agile training as part of the project and Dave Buxton said: “This wasn’t a complete agile workstream, but we did use the agile principles we leant through the training as an enabler to delivery.

“So, for instance, it was agile in the way that we rolled out the initial system to Maintenance functions and requested customer feedback to continually improve the system and increase functionality based on this feedback to cater for individual technology requirements.”

The system has now gone “viral” and is being rolled out across JLR manufacturing with a total of 18 live apps in use including Solihull and Castle Bromwich.

There are also sister apps being used in Halewood for the production teams to cover autonomous maintenance.

Christian Holding, Project Engineer in Paint Shop said: “As well as the cost savings from creating this system ourselves using our own people and their skills, it is also more sustainable and will help us to reduce the impact of our operations on the environment.

“We have estimated that across JLR Manufacturing, we print out up to 975,000 paper maintenance requests a year- that’s the CO2 equivalent to driving a Range Rover 12,000 miles- and that can all go away if we make the switch from a paper based to this digital system.

Mike Hughes, Halewood Paint Shop Manager, said “The team has worked really hard and deserve to be named amongst the top five winners of the Innovation Challenge as they have not only delivered for Halewood- but the whole of JLR Maintenance and it’s rare to see a project that transcends across sites.

“I’m really proud of what they have achieved for the business but the most satisfying thing for me has been watching each one of them grow through the deployment of the project- I hope they enjoy their trip to Hanover!”