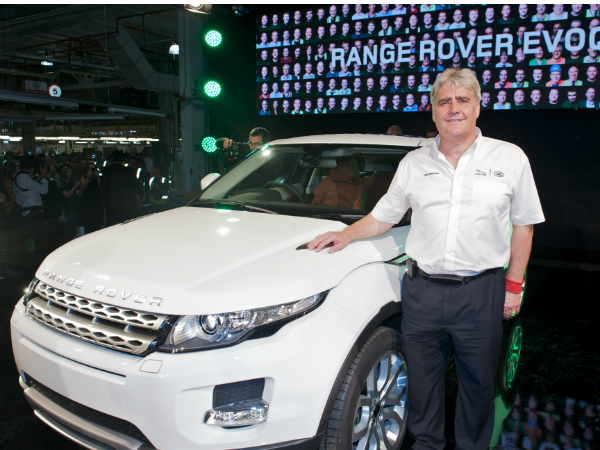 Back in 2011, our longest serving Halewood employee Jim Owens was handed the task of revealing the first ever production Evoque to the world. Jim, now retired after 45 years service, was given the job of driving Evoque Job 1 off the line to a waiting crowd that included colleagues, celebrity guests and senior managers.

Jim recalls his memories of the day, they were as clear as if it happened yesterday. “I remember driving TV personality George Lamb onto the stage. The drive up was in complete darkness though so I drove the car up a ramp and through the black curtains, into the light.

“We stopped production so all the lads off the line could join in the presentation which was a nice thing to do as they had made it all possible. It was a proud moment, one I could never have imagined would happen when I got my first job at Halewood.”

Jim had been a lifetimer at Halewood, joining Ford straight from school at 16 as an apprentice toolmaker, so it was fitting that the site’s long serving employee was the one to introduce the vehicle that would change the fortunes of the whole business.

When asked about his fondest memories of the site, revealing the Evoque was up there. He said though that it was the people that made his time at Halewood so special, particularly through some of the most difficult times in Jim’s life.

“I have many fond memories from my time at Halewood. Perhaps my fondest though is how the people come together and supported each other.

“When my youngest daughter was just five years old she was diagnosed with leukaemia. It was a massive shock to my wife Lynne and I and obviously it impacted how much time I could spend on the job but the management were fantastic.

“The company gave me time off to spend with my daughter and for all the trips to hospital that we had to make.  We spent three years in and out of Alder Hey.

“The Halewood workforce were fantastic too. Many of them rallied round, raising and donating funds for my daughter. I was really touched and grateful and we were lucky to get the all clear a few years later.”

He says now that retirement life is obviously very different to life in manufacturing although he admits that he can’t shake the habit of 45 years of early morning starts.

“It’s probably ingrained in me now. I like to go swimming as soon as the pool opens, I do a load of lengths and then get back for 7:30 so I can look after my granddaughter for the day. On my free days I play golf, I still see some of my work colleagues on the course now and again.

“The best bit about retirement is walking around Liverpool with enough time to look up and appreciate how good our city is. The grandeur of our buildings and just what amazing history can be seen in the buildings.”

“I do miss the banter and companionship from working at Halewood. I miss the buzz of the place and the adrenalin rush of working in production but it’s good to know that the introduction of the new Evoque will keep that going even if I’m not there to see it.