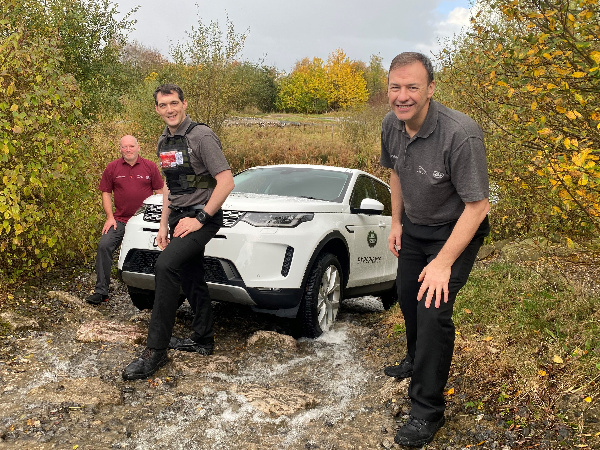 To say the last 11 days have been a challenge for Halewood’s Mike Burton, Greg Everett and Tim Shaughnessy would be quite the understatement.

Between them, as part of their epic Armistice Day Fundraiser, which began on 1 November, they have clocked up an incredible 611 kilometres (which they either walked or cycled) as well as 2,442 press ups and 2,442 sit ups.

The challenge finished last Wednesday (11 November) at 11am to mark Armistice Day and they have raised a total of £1,755.94 (£2,079.43 including Gift Aid) for two armed forces charities including Mission Motorsport and The Royal British Legion.

Mike Burton, an engineer from Plant Quality, who also wore an 11 kilometre weights vest throughout the challenge, said: “The first few days were definitely the hardest as it took me back to days when I was wearing body armour in operations, because it’s a similar weight, so I found pain back in places which I haven’t experienced for a while!”

“It’s been tough going but I’m really pleased that Tim, Greg and I have been able to use this challenge to help raise awareness and generate some much needed funds for two armed forces charities that are really struggling at the moment.”

Asked whether he was keen to hang up his vest now the challenge was over, Mike said: “The vest is definitely going back in the garage now and I have no plans to put it on for a while!”

Greg Everett, also an engineer in Plant Quality, said: “Charities like Mission Motorsport and the Royal British Legion are a lifeline for veterans when they come out of service and they have really taken a hit this year since the outbreak of the coronavirus.

“They rely on one to one interaction at events, which just can’t happen at the moment, so this was our way of supporting them and giving back after all they have done for our servicemen and women.”

Tim Shaughnessy, a Group Leader in Trim & Final, said: “As well a team challenge, this was a personal one for me too as by the end of it, I managed to jog the 11 kilometres- something I haven’t done for a while, so I felt a real sense of achievement and it was the perfect way to end the challenge.”

There is still time to sponsor the team which you can do by visiting their Virgin Money Giving page here.

1
We’ve supported some great causes with our Motorvate cheques!