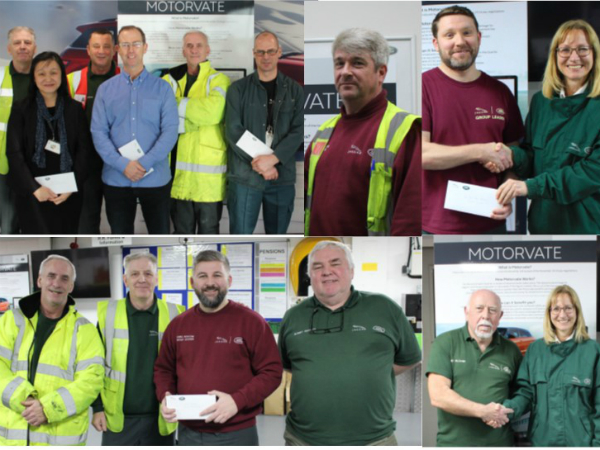 Motorvate in Halewood this March

We've donated money to some really great causes this March through Motorvate...

Vivien Lang would like to make a donation to Warrington Town U8’s which is her son’s team.   They want to encourage children from all backgrounds to develop their football, social and team building skills in a safe environment. As the team train in all weathers this donation will help with kit to keep them warm.

Barry Cusack would like to make a donation to Headway Sefton.  They give emotional and practical support to people with brain injuries. They also offer support to their families and carers.  They have monthly meetings where they can share their experiences. This donation will really help them to keep these weekly meetings going, giving help to people who  really need it.

John Hodgson would like to support his son’s rugby team, Caldy Rugby Club. His son plays for the junior team who rely on hand me downs from the teams above, which can lead to some sizing issues!  Without the junior team the club wouldn’t survive and giving them their own shirts would really give them pride in the team.

Chris Roscoe would like to make a donation to Future Gymnastics where his daughter and niece attend. Future Gymnastics gives children of all ages the chance to learn and perform gymnastics in a safe environment.  The donation will help them to buy more equipment such as mats and apparatus.

Mark Champion requested a donation for An Hour for Others, which lead to us giving out Hampers over the festive period. The charity aims to brighten the lives of disadvantaged people across Merseyside.  People can donate their time to those who really need it. The donation will help them to complete their work, whether it’s for day trips, helping to decorate a home or food for those who need it.

Tony Glover would like a donation to be made to Bentley Operatic Society. The society puts on an annual fully staged and costumed production and has also started a short concert season performing for charitable causes free of charge. This donation would help to purchase music folders which will help the company as they expand and do more concerts.

Chris Maher would like to make a donation to Future Gym Football. This is a new football club training ages 2-6 years old. They do fun football and development skills with the kids. The club would like money for two new Samba goals and kit.