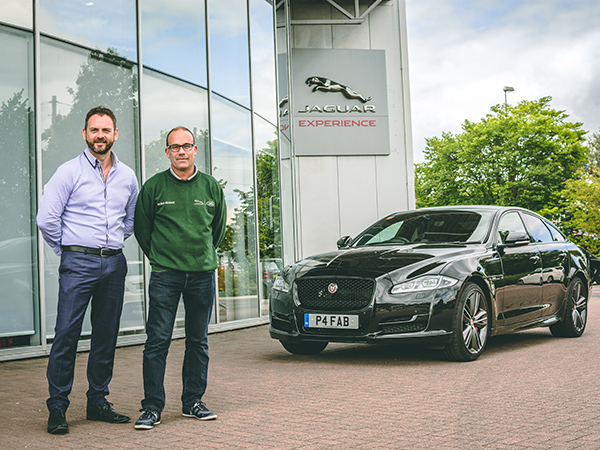 After a drive in an XJ Fabian Muscat knew instantly he just had to have one.

After receiving a reward and recognition car for staying late to carry out an urgent repair, Fabian Muscat fell in love with the Jaguar XJ. So much so, he decided he just had to have one for himself.

Fabian started out as a sheet metal worker for Abbey Panels before joining Jaguar in 2002. With the exception of a 14 month spell at Browns Lane he’s spent the majority of his career in BIW’s OTA operation here at Castle Bromwich.

He currently works within the Black Box facility in E Block where they carry out bodywork repairs that can range from anything from crossed threads through to major panel damage.

One afternoon an urgent repair came through that would mean working late into the evening.

Dependable as ever, the 48-year-old offered to stay to ensure the job was completed to the high standard expected.

“If a job needs doing I’m happy to help out to make sure it is done right,” said Fabian.

“The only issue was that because I’m part of the lift share scheme and it wasn’t my turn to drive I had no way of getting myself back home that evening.”

Made aware of the predicament and wanting to show his appreciation for Fabian’s dedication to getting the job done, BIW Senior Manager Padraig Bollard arranged for him to take an XJ home for the evening through the reward and recognition process.

“Fabian has a good appreciation of the business needs and consistently demonstrates a flexible and committed approach to meeting them,” said Padraig.

“He’s stepped in to help out previously on many occasions, so this reward and recognition was well deserved.”

Fabian soon had a set of XJ keys dropped into his hands.

“That put a big smile on my face,” continued Fabian. “Padraig had gone out of his way to organise that for me. It was nice to be recognised for the work I’d done plus getting home was no longer an issue.

“It was the first time I’d had the opportunity to drive one out on the roads properly. I’ve moved them around site before but when you really get them going it’s something else entirely.

“The whole experience just really blew me away, the luxury inside makes it such a nice place to be, the driving position, power and poise it has on the road is just amazing.”

That was it, Fabian already a massive Jaguar fan was hooked.

Describing himself as lucky to have had the opportunity to have owned seven Jaguars over the years, including X-TYPEs and XF’s, he’s no stranger to the brand.

“I love my cars and had a Range Rover Sport at the time that was about due a change,” he continued. “That go in the XJ had just made my mind up for me what I was going to be driving next.”

After a bit of shopping around Fabian had found himself a black R Sport XJ at the Peterborough dealership, who gave him a great deal on his part exchange an threw in some extras as he works for JLR.

“I’m definitely very picky when I’m buying a car,” he recalls. “I can be a car salesman’s nightmare as I go over every surface in fine detail.

“The one I’d found though was absolutely perfect.

“When I picked it up the first thing I did was to take my sister, nephew and nieces out for a drive in it. I’ve been keen to give it a few bigger runs out since then too.

“Outside of work I’m into aviation and will spend time at different UK airports, I’ve made the trip down to Heathrow a few times in it now and the XJ just eats up the miles. I get out after a long trip feeling just as good as I did when I got in.

“The car also turns heads when you drive it too and that’s a nice feeling, my only issue with it is finding a nice enough parking space to leave it in.”

We asked him why he feels it is important for people to take opportunities to drive the cars we build here at CB?

“I know it’s a big purchase, but if you’ve got the money to spend on a little luxury in your life then buying a Jaguar is a good way to go about it. Even if you don’t own one then try and take any opportunity to get behind the wheel of one of our cars when you can.

“You get more of a sense of how good the cars that we build really are and you’re proud that you’ve played your part in creating that feeling.”

Finally we asked what he thought of the recent all-electric XJ announcement that will be coming to the plant?

“It has got big shoes to fill with the current XJ being so perfect in my eyes,” he replied. “I can’t wait to see it though, you never know, one day I might get to drive one of those too.”