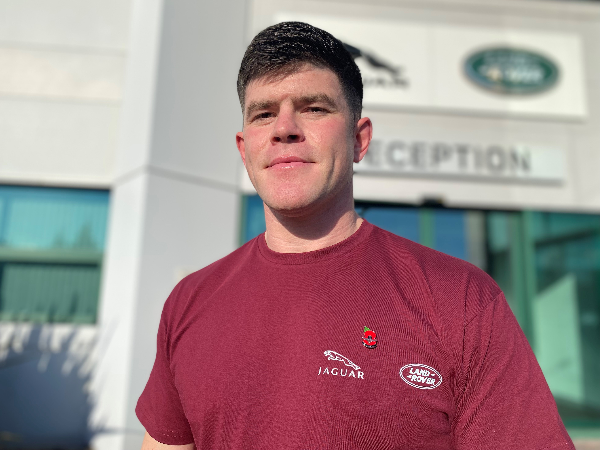 This Thursday (11 November) marks Armistice Day so we thought it would be a fitting time to speak to Halewood’s newly appointed Armed Forces Committee lead, James Clarke, about his new role and his hopes to build a strong services’ network at the factory.

James has worked at Halewood for ten years and is a Group Leader on Line four in Trim & Final. He joined the Army Reserves six years ago and is part of the 4th Battalion, Parachute Regiment based in Altcar, Formby.

As well as holding down a full-time job, James spends two weekends away every month training for his regiment and has completed a tour of Afghanistan.

Speaking about his new role as Halewood Armed Forces Committee Lead, James said: “For me, starting the role during the same week as we mark Armistice Day has real significance.

“It’s a day which is a big part of who I am having served with servicemen and women who have passed away. A time where we fall silent to remember all the fallen from past and current conflicts and all of those people, their friends, comrades and family will be at the forefront of my mind this Thursday.”

James and his Battalion will also be taking part in Liverpool’s Remembrance Day Parade this coming Sunday, in the city centre.

Asked about his hopes for the Armed Forces Network, James, said: “I know quite a few people at the factory who are either serving in the Reserves like me or are ex services, so I’m hoping that I can get them on board and establish a community at Halewood which can make a real difference.

“Mental health will be one of the top topics on my agenda- we are losing far too many service men and women to suicide, and we need to eradicate the stigma around mental health in the Army.

“I want to get the conversation going and look at doing fundraising activities with the network once we are up and running to support some of the fantastic charity work which is already going on in this space- so I’m really looking forward to being on board.”