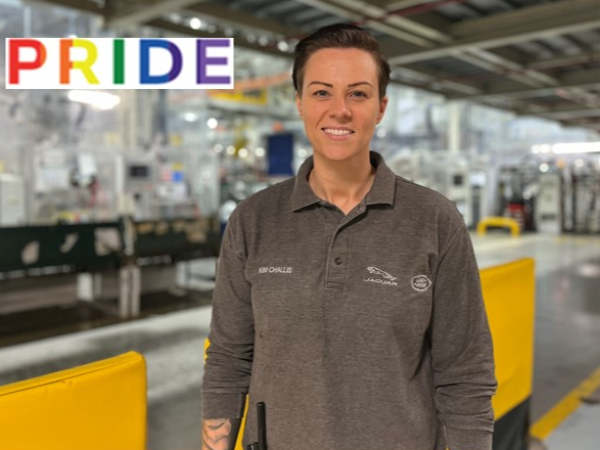 This week we catch up with Kim Challis, the BiW clerk, who is part of the PRIDE next work in Halewood. The network aims to support and foster a safe, open environment for all, and to promote inclusivity across JLR.

Kim has worked at Halewood of the last 11 years, working in underbody for four years before becoming the BiW clerk.  Before joining Halewood Kim worked in a supermarket but wanted to move to a role where she could build a career and grabbed the opportunity at Halewood with both hands.  In her spare time Kim is a busy mum to three-year-old Reggie, and when time allows, she also enjoys boxing!

Kim tells us: “The PRIDE network is relatively new in Halewood, but once a month there is a JLR wide PRIDE network call I join where we talk about what we can improve and changes we can make in our plants.

“It’s all about raising awareness and people’s understanding which is what we talk about as a network.”

Kim is gay and tells us when her and Reggie's other mum were having him, people had a lot of questions, which she was more than happy to answer – it’s better than people speculating and jumping to the wrong conclusions!

Kim shared with us: “Sometimes people are scared to offend you, or say something they shouldn’t, but I would much prefer them to ask me any questions they have.  They may then share that information with their friends, or go home and tell their family, which is spreading awareness.”

The network is open to everyone, whether you just want to become an ally and learn more, or you want support and help – the network is there.

Kim tells us: “There is no pressure to be involved, but if you need support, or want to offer support then we’d love to hear from you.  I’m not part of the network because I’m gay, but because I want to be involved and support others.

2
RESET: HALEWOOD HAS THE TOOLS FOR THE JOB