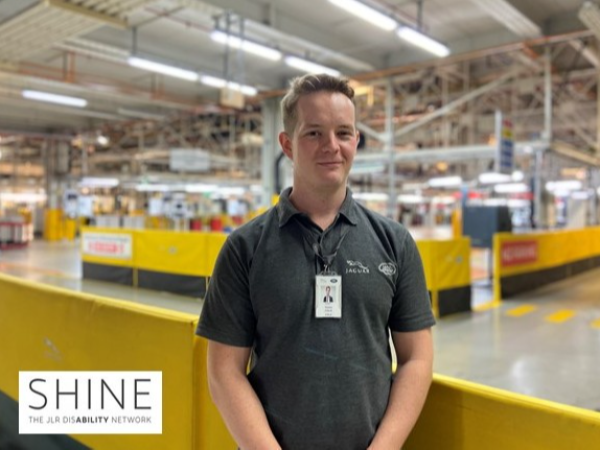 Thomas Cotterill is a Degree Apprentice who has worked at JLR for the past six years. He is currently working in Launch and is also an ally of the SHINE network which aims to champion and celebrate equality and diversity through support of our colleagues affected by disabilities. Tom tells us why he has such a passion for the network….

As a child Tom was diagnosed with high functioning autism spectrum disorder (ASD) which is an invisible disability that makes certain situations difficult, especially social ones.  Tom fought hard for his apprenticeship, admitting he wasn't great at tests, but Engineering, finding physical solutions to problems and a hands-on approach really played to his strengths and on his second attempt he passed the exam for his apprenticeship.

Tom admits though his time here has been extremely rewarding, his ASD has also made it extremely challenging for him at times, telling us: ‘I did have times where I questioned whether I was good enough for the role.  People would tell me I wasn’t good at delegating or time management which are things people with ASD do struggle with and I would worry that I wouldn’t be able to improve those areas.

“I didn’t want people to think I was weird or anti-social. I sometimes find it difficult to read people, whether they are joking, or if they are telling the truth.  I have got better over time and the diagnosis as a child has helped me understand and face the challenges ahead. Talking about it is important as it helps people to understand me and also for others who may be facing a similar situation to know that things will be okay.”

For Tom one of the key elements of having a network like this is raising awareness and also letting others know that it’s okay to be different.  Some of the symptoms of his ASD also really suit the skills needed for his job, such as highly focussed, good at repetitive jobs and analysing situations.  His job has also really helped his social skills and his ability to communicate with people.

Tom thinks the network is important as it gives people the chance to listen and also share their experiences, telling us: “when the plant was shutdown during covid I really struggled to stay motivated and it made me feel a little down, coming back, the diversity training and the networks really spoke to me and helped me to talk through how I was feeling in that moment and also with the wider issues we all face.  It’s important for us all to be mindful of what is going on around us and what others are facing whether you can see it or not.”

If you would like to find out more about the network or ASD please contact Tom: tcotter1@jaguarlandrover.com.