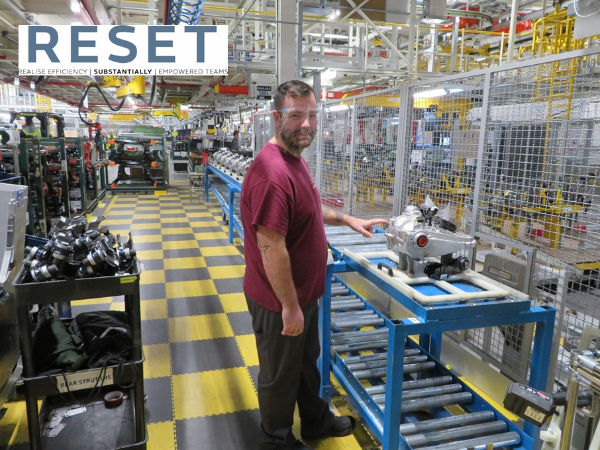 A team from the North Works has proven they can help Halewood to rollback on costs by implementing a new conveyor system, which will save the plant £100,000 a year.

The conveyor system they have created means an associate will no longer be required to push a trolley with the ERAD part from one end of the line to another, helping to save on labour and overhead costs.

However, as well as being the instigators of the idea, the team believed they could help Halewood ‘cash-in’ on even more savings by designing the technology in-house, rather than bringing in an external contractor to do it which would have cost an additional £55,000.

With the help of the teams in Facilities, led by Mark Allen and Mike Clements, CME, and Production, that’s exactly what they did and between them were able to build the system for  £16,000- saving Halewood £39,000 in the process.

Speaking about the project, Jay Stafford, said: “This has been a brilliant exercise as it was a real cross functional collaboration between teams across the plant, working as one Halewood.

“As a result, head count has been reduced by one, a lot of waiting time has been eliminated and we have an additional cost saving on DHL sequencing too.

“We have so much talent amongst our people and that’s exactly what this project has shown us and I’m really proud of what we have been able to achieve here.”

Tommy Whitehead, Production Leader with the Efficiencies Team, said: “As a plant, we have to be more efficient with our processes and challenge ourselves to make them work better for us, so we can keep cash in the business at this critical time.

“That’s exactly what Jay and the team has done and have managed to save over £100,000 by simply thinking outside the box- or trolley in this case!”

“October has been a great month for Charge+ but please continue to keep your great cost-saving ideas rolling in, as we are finding a little goes a very long way in our journey to become the plant of choice for Jaguar Land Rover.”