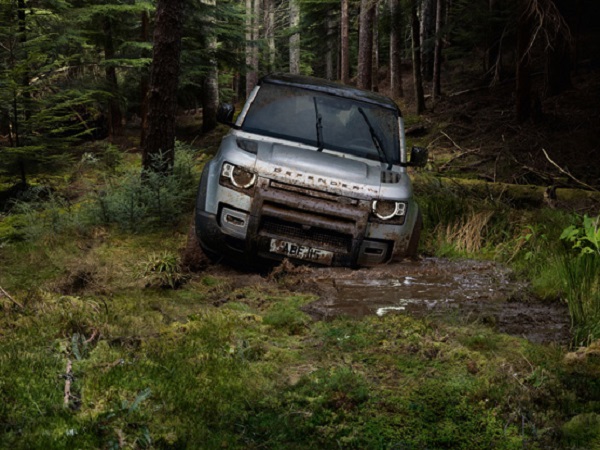 New Defender redefines the toughness and versatility of its predecessors

The Land Rover Defender has always been a symbol of strength, and the new model is the toughest and most capable model yet.

Tested to the extreme during its global development programme, engineers put the New Defender in some of the world’s harshest environments.

Featuring a new body structure alongside a number of world-first technologies and proven hardware, the New Defender is fit to take on the 21st century.

Designed and engineered to deliver transformational breadth of capability and on-road handling, the core team of designers and engineers agreed that the Defender family would include 90 and 110 members, and retain the distinctive silhouette, side-hinged rear door and central jump seat.

“New Defender gives us licence to do things differently, to push the boundaries and do the unthinkable, without losing the character and authenticity of the original.

“From the start we had an absolute obsession with functionality beneath the skin, from choosing the right materials through to state-of-the-art connectivity. The result is not only the most capable Land Rover ever made, but also a truly comfortable, modern vehicle that people will love to drive.”

Getting underneath the Defender’s skin

Engineered to be practical, flexible and capable, the architecture doesn’t share a single body-in-white panel with any other Land Rover, and requires its own body assembly line at the manufacturing plant in Nitra, Slovakia.

Raising the body by 20mm compared to the brand’s existing range of SUVs and relocating the battery and cooling circuits has given the engineering team the ability to deliver ultra-short front and rear overhangs.

These guarantee the Defender has approach and departure angles of 38 and 40 degrees respectively. With a wheelbase of 3,022mm – 99mm longer than the Discovery – the 110 has a breakover angle of 28 degrees at off-road height, while the 90’s is 31 degrees, providing excellent off-road geometry.

The monocoque body construction is the stiffest aluminium body Land Rover has ever produced, and is able to withstand 6.5 tonnes snatch load through its recovery points. The Defender’s strong, stiff structure provides the perfect foundations for its advanced all-independent chassis.

The familiar sophisticated double wishbone front and integral link rear suspension layouts include new steel sub-frames and uprated ball joints and bushes. They have been designed to withstand severe off-road impacts – the wheels can take up to seven tonnes of vertical load into the body.

This means the New Defender is extremely capable as it’s able to combine peerless off-road performance with cruising comfort, and rewarding handling characteristics.

Adaptive dynamics is available with Electronic Air Suspension allowing customers to fine-tune the driving characteristics to suit them. The Defender’s adaptive dampers are able to monitor body movement up to 500 times per second and respond almost instantaneously to enhance comfort and control.

Air suspension helps to transform the on-road handling and the vehicle’s all-terrain capability. It can also lifts the 4x4 75mm when the off-road height is selected. The system can raise the car an additional 70mm lifting the body up by a maximum of 145mm when needed, as well as lowering it by 50mm to improve access in and out of the vehicle.

The system comes into its own during low-speed off-road manoeuvres, when the traction control and autonomous emergency braking systems are triggered – locking a wheel within 150 milliseconds compared to 300 milliseconds with a conventional system.

“The old Defender was fun to drive, but flawed. The New Defender is fun, but without the flaws. The result is a 4x4 that will put a smile on your face on any terrain and leave you feeling refreshed after a long drive.”

Making its debut in the New Defender is Configurable Terrain Response, which allows drivers to fine-tune the set-up of their vehicle to suit the off-road conditions.

Drivers can combat cross axle slip by utilising the Centre Slip Limited, and Centre and Rear Slip Limited options on their Pivi Pro infotainment system. There is also three settings to adjust the throttle, gearbox, steering and traction control, allowing experienced off-roaders and novices the opportunity to tailor their vehicle.

The system even allows four profiles to be saved, so different drivers can quickly activate their preferred setting.

Pivi Pro provides a visual of how deep the water is, and on exit the vehicle drags its brakes automatically, to clean and dry the discs to ensure optimum braking performance is quickly restored.

The Defender’s new strong architecture means it is perfect for hauling heavy loads whether it is towing or has items strapped to its roof.

With a maximum towing capacity of 3,720kg, and paired with Advanced Tow Assist, the New Defender can pull and manoeuvre heavy loads with ease.

The ultra-strong body means the Defender can carry a maximum of 168kg of supplies on its roof while on the move. It also doubles up as the perfect home away from home, thanks to its 300kg maximum static roof load and the pop-up roof tent accessory.

There is plenty of space and versatility inside too. The Defender 110 has a maximum payload of 900kg, with the boot providing up to 1,075 litres of space, which is extended to 2,380 litres with the second row seats folded down.

There is also plenty of space throughout the cabin to store items, including a lockable 5.8-litre glovebox and deep door pockets, while the exposed cross car beam can hold 6.9-litres of things too.

The Defender is also available with some handy interior features including a machine washable clip-in loadspace cover that has been designed to double up as ground mat for picnics or changing footwear on wet surfaces.

While a lockable heavy duty security box provides added protection. It fixes to the loadspace rails and is big enough to hold laptops, tablets and other valuables. 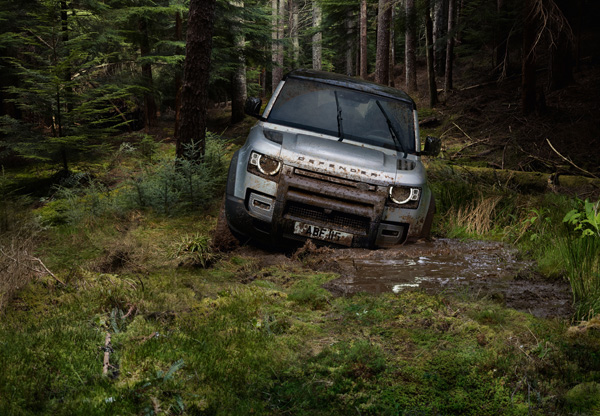 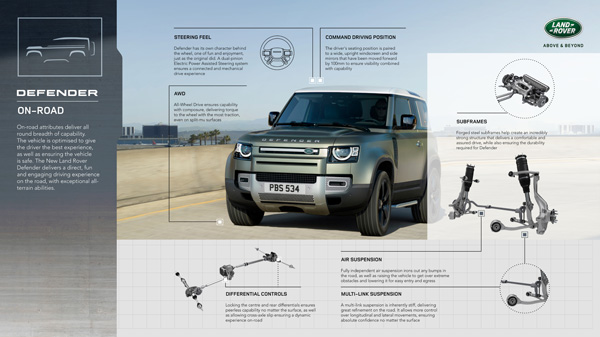 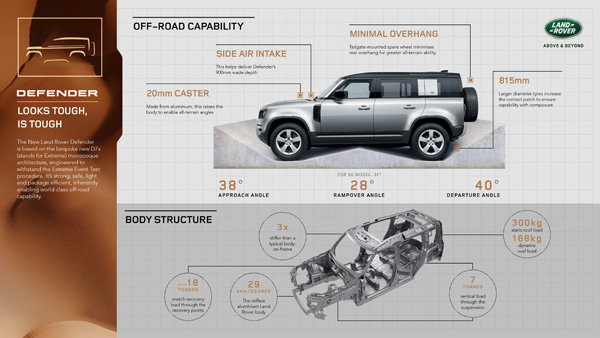 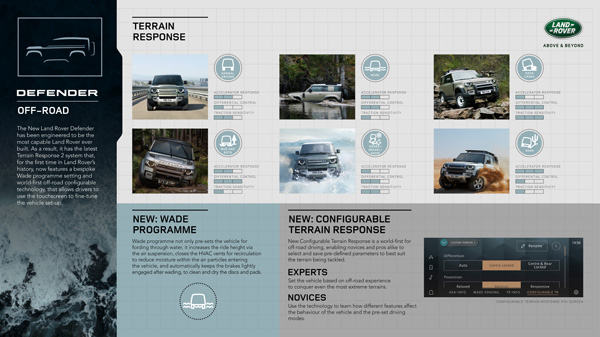