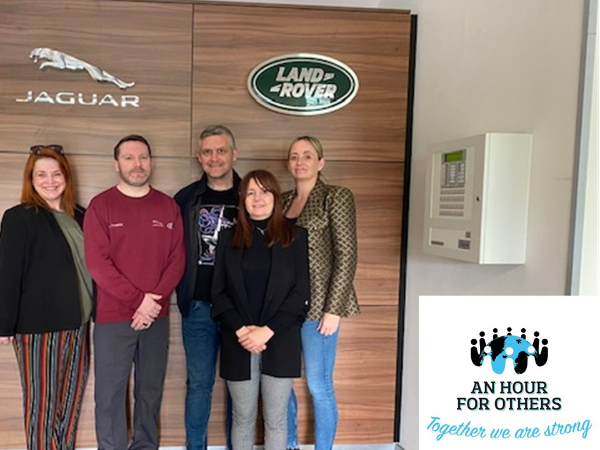 Just before Easter shutdown, local charity An Hour for Others (AHFO), received the surprise of their lives when they met up on site with our Halewood MOTORVATE committee and were told they were the charity winners of a new Discovery Sport!

Each and every one of you has played an important part in making this happen as MOTORVATE is an employee scheme which rewards good attendance. So, by coming to work every day, you are not only helping us to make the best quality cars for our customers but are also supporting the incredible work of local charities like An Hour for Others.

An Hour for Others is a Liverpool based charity which aims to build stronger communities and inspire change by getting individuals and business to come together to support vulnerable people experiencing financial or emotional hardship.

It was Mark Champion, a Group Leader in Trim & Final Doorline , who put forward An Hour for Other for the MOTORVATE charity car draw.

Mark said: “I’ve received funding for AHFO through MOTORVATE before but last year decided to apply for the charity car as I knew they could really benefit from it as they deliver food, clothes, and toys to the families around Liverpool as well as take children on days out.

“It makes me feel proud that Jaguar Land Rover can support important local organisations like this through MOTORVATE and I’m delighted that a car made by our people, with pride on Merseyside, will be able to make a difference to so many lives.”

Gill Watkins, Co-founder of An Hour for Others, said: “There are no words to describe the feelings we had when we were told we had won the car- we were speechless.

“Being recognised by a company like Jaguar Land Rover for all the hard work we have put into our charity and the community over the last eight years really is what dreams are made of.”

Asked what the car will be used for, Gill said: “Our new Discovery Sport (I can’t believe I am saying that!) will be used in all five areas of support we do at the charity on a daily basis, 365 days of the year.

“Primarily it will be for transporting children who don’t have access to a car and means we can help engage with families with our weekly health and wellbeing and children’s half terms groups.

“Thank you to all Halewood employees and everyone at Jaguar Land Rover for this incredibly kind gesture.”

Benefits are triggered if attendance in a quarter is below the 3% target or there is an improvement of 0.25% from the previous quarter.

You can  apply for funding or vehicles by completing a ‘Donation Request Form’, which are available to collect from the local People Centres, MOTORVATE display boards, Line Managers, TU Representatives, as well as on the People Portal.

Any employee who has achieved 100% attendance, in a quarter of the year when the MOTORVATE awards are triggered, is also automatically entered into a company- wide prize draw, for the chance to win one of two Jaguar E-PACES.

Great attendance helps us to deliver on our priority- building the best quality cars and getting them to our customers on time, so we can maintain our reputation as a dependable plant of choice.