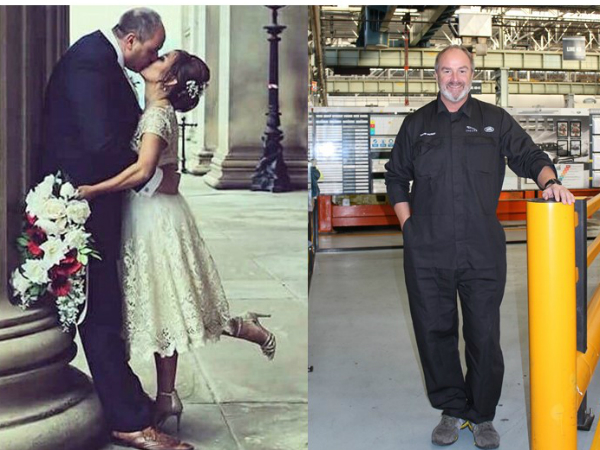 Strewth… David Hurst in our Halewood Press Shop certainly knows how to stop romance from going “down under” even from 11,000 miles away!

Vicky, his wife of three years, may live in Brisbane but that won’t stop the loved up pair from spending Valentine’s Day together. So how will they get to share this special day as a couple? Well according to David, it’s very simple: “Facetime and lots of it.” Despite now living in two different continents, David and Vicky met in Halewood when they were 12 and attended the same senior school. They were best friends up until the age of 16 then drifted apart.

David joined JLR in 1989 and two years later, Vicky moved to Australia. Both went on to have families of their own and between them have six children and four grandchildren. However fate would bring them back together when six years ago they were reunited after stumbling across each other on Facebook and they remained firm friends.

In 2014, Vicky who is a quality engineer, returned to her native Liverpool after taking on an eighteen month contract in the city and finally got to meet up with David after 28 years apart. And the rest, as they say, is history. They married in March 2016 but in June 2018, Vicky returned to Australia and the pair now have a long distance marriage. Despite only being able to meet up twice a year, that doesn’t hold them back and they spend every evening and morning Facetiming each other.

David said: “Believe it or not, the job I do in metal performance actually makes it easier for our marriage to work because I’m on a lot of night shifts which is ideal as it means I can call Vicky when I finish and it’s her daytime! “It’s hard not being together but technology nowadays makes it possible for us to spend quality time together every day. This year will be our first Valentine’s Day apart but that won’t stop us being together. We’ve said we will Facetime each other with a glass of wine so we will make it special for one another.”

Asked what the secret is to a ‘long’ (distance) and happy marriage, he said: “If you want something enough, you can make it work. You just have to find time for one another, even if you live in different continents and time zones- Vicky and I are proof of that!”