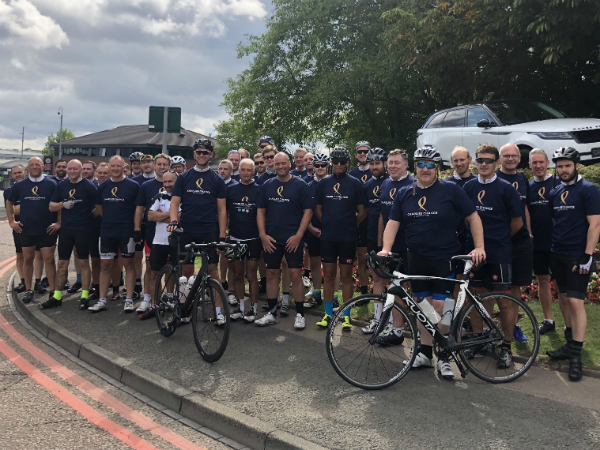 What do you get if you cross 33 MAMILs (Middle Aged Men in Lycra) with an epic 145 mile charity cycle challenge? A #cycletoworkday Jaguar Land Rover style!

Last month a Halewood team decided to punish the pedals for #cycletoworkday by taking on a 145 mile commute to all our UK sites in one day.

The 33 cyclists made up of a cross-functional group of 30 Halewood employees (including Manufacturing, AME, Purchasing, Engineering) as well as two Leadec colleagues and one DHL colleague kicked off their epic work journey at Gaydon and travelled along the lanes to Oxford Road.

After a quick photo stop and shake of the charity buckets the team headed to Whitley. The tour continued up to Solihull, Castle Bromwich and a final stop in Wolverhampton at our Engine Manufacturing Centre.

In true JLR style all of the sites got right behind their colleagues, giving them a hero’s welcome and some much needed R&R.

Our guys had to crank it up a gear for the last leg of the journey arriving back at plant shortly after 8pm greeted by the  welcoming cheers and hugs of their colleagues and loved ones, just before the rain set in and the sun set on #cycletoworkday.

The triumphant team took on this massive challenge all in aid of Halewood’s charity of the year, Charlies Chance Foundation, which helps families and children with cancer access treatment unavailable in the U.K.  The team managed to raise an impressive £21,777!  A massive congratulations to everyone who took part!

If you would like to support and donate to the charity please visit : www.justgiving.com/companyteams/jlrcyclothon.

1
AN EVENING WITH JAGUAR DESIGN

View more
0
Halewood's cycling scouser is on his way...