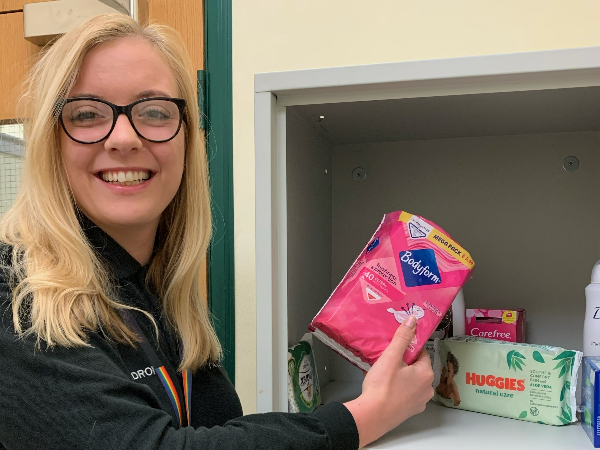 OPENING UP ON WOMEN’S HEALTH WITH NEW MOTHER NATURE LOCKERS

We are delighted to announce the launch of our Mother Nature lockers which provide female employees with access to free sanitary products on site, to help support menstrual or menopausal needs.

The lockers are situated in 10 female toilets across the plant (see full locations below) and are accessible to all female employees at Halewood as well as contractors and visitors.

This is a project which has been led by the Halewood Gender Equality Network (GEN) and Women in Engineering & Allies (WIE&A) group who are working hard to improve women’s wellbeing at work and raise awareness of the stigma that is often associated with women’s menstrual cycles and menopause.

The idea was inspired by Gaydon based Team Improvement Circle - Pains of Periods - who launched their own Mother Nature lockers in 2020, to great success.

Abbie Waldron, who is part of the WIE&A network, said: “We want females at Halewood to feel supported and cared for when it comes to issues with periods and menopause and we're aware that access to sanitary products on site, in case of emergency, was inadequate.

“Even for those female toilets that had machines in, they charged up to four times more for sanitary wear then what you would pay in a supermarket, and you also needed coins to buy them- when the rest of the site has gone cashless.

Abbie, added: “Our new purpose is about embracing an inclusive culture for our people and the lockers are helping to do this by taking the taboo out of the important issues and challenges our female workforce face when it comes to periods and the menstrual cycle.

Talking about progress of the Mother Nature lockers so far, Huijie Ma, from the GEN network and co - chair of our Halewood Inclusion council, said: “The lockers have been up and running for six weeks now and we have already had some great feedback from women who have benefited from using them.

“We want to thank everyone who has helped us to bring this exceptional purpose driven project to the life so we can continue to put people at the heart of what we do.

A huge thank you to all those employees so far who have contributed to the start-up fund so we can purchase the items to go in the lockers, as well as Anna Riley, from Estates, for her invaluable help in fitting the lockers across the plant”.

Where can we find the lockers at Halewood?