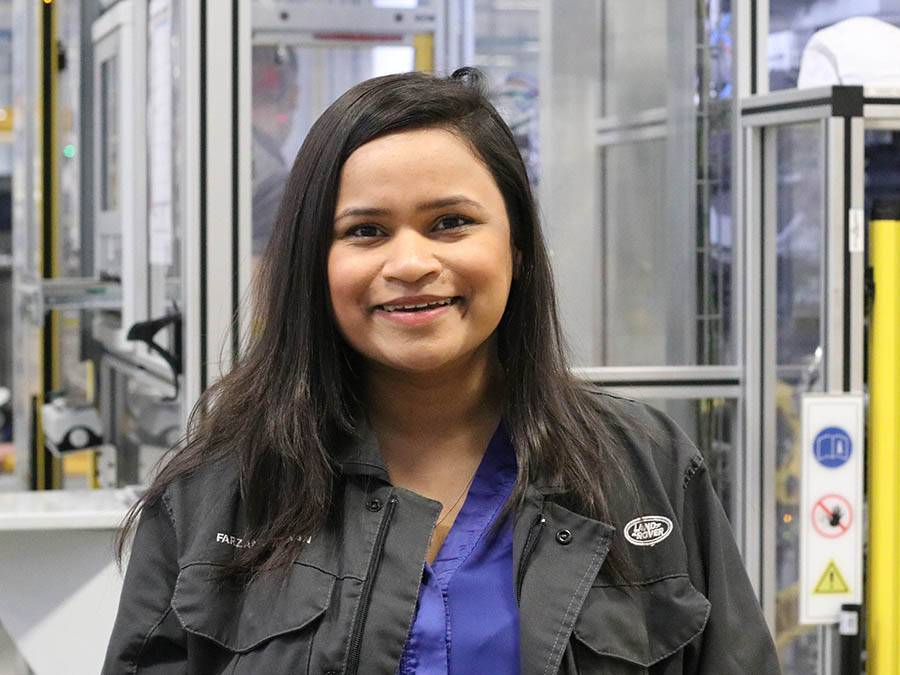 Fortune favours the brave and Advanced Manufacturing Technology (AMT) engineer Farzana Mannan was certainly that when she decided to develop a new algorithm that would predict whether an engine produced at the EMC could lead to a warranty claim in the future, despite the engine passing the cold test process.

The project is now patent pending and recently picked up the Jaguar Land Rover Innovista award for Piloted Technologies. It’s a far cry from Farzana’s childhood ambition of becoming an astronaut, but weirdly came as a result of working in operations at the EMC on the starry night shift.

Farzana began her Jaguar Land Rover career as a graduate apprentice and during her placement at the EMC gained a real appreciation of product quality, test engineering and assembly operations.

In the quiet early hours of the morning, she came up with the idea that you could predict and potentially drive out noise, vibration and harshness engine failures before an engine event left the facility. Her resulting algorithm looks at the many tests that the engine goes through and maps results to failure in the field.

She said: “This check system not only looks at what components may fail, but how they might fail and crucially for customers, how many road miles it is predicted to fail. The data can be used to make improvements, changes and drive down faults.”

Farzana’s project was up against thirteen other finalists at the Innovista awards, who showcased their innovative ideas and projects to a panel of experienced and senior judges led by Jaguar Land Rover’s chief research engineer Aram Kradjian.

Senior engineer in the AMT team, Chris Smyth supported Farzana with the project, which he says is a great example of innovation in practice. He was keen, alongside the rest of the team, to enter the project into the Innovista awards and helped remove any roadblocks and advise on the technical aspects, plus next steps.

“It was clear she was onto something fairly early on and the more she presented the more functionality we found it was capable of giving,” said Chris.

“As we were given challenges by customers, we were finding the system answered those challenges.

“We are really excited how scalable and appropriate (the system) is across the business. There’s been keen interest from our vehicle operations customers to get this into their processes; anywhere we have a test or a signal. We are having to temper the expectations to ensure it’s fully robust, before it’s rolled out.”

The project also had the full backing of PTME director John Poli and head of PTO Peter Domeney, during its application.

The Innovista finals was a nail-biting evening when short-listed projects and their patrons gathered to hear who had won the coveted prizes. It was made more nerve-racking due to the strength of the four other finalists in the Piloted Technologies category, although Farzana had already received some fantastic feedback from the esteemed judges on her project.

“When we were announced as winners, it was a fantastic moment,” said Chris.

“It was a great evening to meet and mingle with people who we wouldn’t normally meet. The board all attended. We also got to catch up with Nigel Blenkinsop, who used to be the director of PTO, who gave us his congratulations.

“It’s really great to be acknowledged by the wider business for the work Farzana has put in, as well as the work of the wider Powertrain Manufacturing Engineering team.

“We’ve had a few projects over the past years that have got all the way to the finals, but not quite over the line to win. There was a lot of focus on lessons learnt from these experiences and it’s nice to finally win. It’s very satisfying for the team.”

Farzana added: “I had no idea when I started this project that it would lead to an award and a patent pending.”

Over the next couple of months, we’ll be telling you more about this year’s Manufacturing Innovation Challenge, designed for anyone working in Powertrain Operations and specifically designed to encourage innovation in the manufacturing environment, as a feed for Innovista.

So keep your eyes peeled for more information in your weekly On Track enews, on screens across the site and in People Talk Monthly.

This check system not only looks at what components may fail, but how they might fail and crucially for customers, how many road miles it is predicted to fail. The data can be used to make improvements, changes and drive down faults.