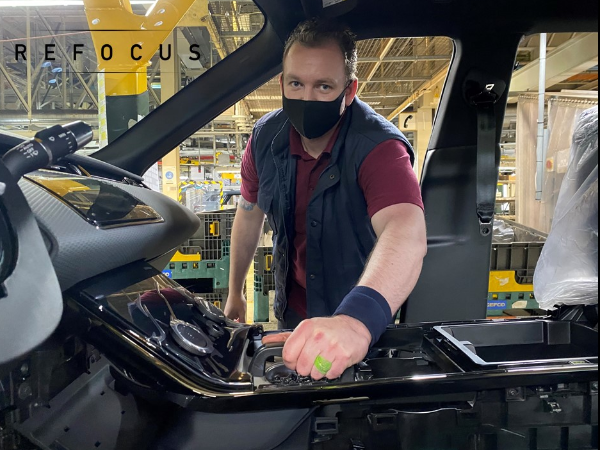 We can all contribute to improving quality and making sure we do the best possible job that we can and we are already seeing some incredible examples of this across the business.

Take Paul Jones for instance, a group leader in Trim & Final, who came up with a “tray”mendous” solution to improve the quality of the console topping process in the Evoque.

Fitting screws into the centre console of the car had become an ongoing source of frustration for Paul and his team as the screws would often fall down the side when associates were fitting them in difficult to access places.

As the screws were only 10mm long and black, it made them very difficult to retrieve when they slipped down the back and this created a rattle sound on the drive test, which lead to a costly repairs.

With the cost of repairs for a rattle priced at £420, based on the number of cars we make every day, if one rogue screw was dropped in each car, it could potentially cost Halewood £90,720 a day in rectification costs.

Not ones to back down from a challenge, Paul and team mate, Gary Barker, developed a small protective tray which sits perfectly between the gaps in the centre console and prevents screws falling down the back. And thanks to a magnet which was cleverly built into the floor of the plate, it is also doubles up as a tray for the screws when they are being fitted!

Paul’s work led him to being named Kaizen of the month in November and last week, On Track caught up with him to see how his new quality improvement process was getting on.

Paul, said: “I’m delighted to say that the trays seem to be doing the job and number of screws found in the centre console have dropped significantly!

“We started using them in week 43, and since then we've had six consecutive weeks of finding no fixings in the Hydropulse, which is a huge improvement as before Week 38, there would be around 2-4 per week which cost the business around £5000 a year in rectification costs."

Paul added: “However, like every good Kaizen, in the spirit of continuous improvement, Gary and I are already looking for more ways to make the process even more effective but we are glad to be off to a very good start.

Mike Hughes, Plant Quality Manager, at Halewood, said: “All of our ideas and actions, no matter how big or small can really make a big difference to improving our quality processes at Halewood and we all have a responsibility to play our part.

“Paul and Gary have done a sterling job because their centre console tray solution not only has a cost saving benefit by reducing DVF and unnecessary rework, but also helps us to make our quality better by getting things right first time for our customers.”

View more
0
GRAND DESIGNS: LET’S GO UP ON THE ROOF!