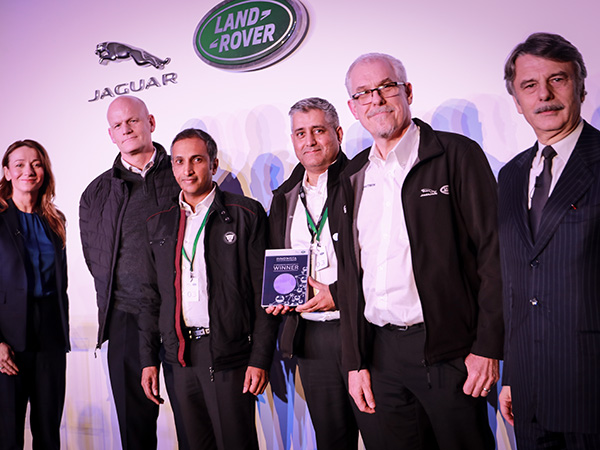 Paint Shop’s Plastic Fantastic team decided to take on a mountain as a side project and as a result have since saved millions of pounds with their innovative approach to paint repairs.

When we caught up with them they were still buzzing following an Innovista Award win, having just picked up the prize in the Implemented Innovation category.

The win is just the latest chapter for the team comprising of Tony Chatwin, Jay Sadiq, Gary Truelove and Kal Pahal. Their story began nearly three years ago…

Sat behind the back of B Block is a storage area that serves as the final home for unwanted plastic parts that are destined for the recycling centre. Back in 2016 this pile was considerably bigger, so much so it was referred to by the locals as the plastic mountain.

“Every day we’d walk past this huge pile of scrap vehicle parts, made up mostly of damaged bumpers and tailgates,” recalled Tony. “A few of us had noticed it and we asked around to find out the source of all this plastic waste. The short answer was there wasn’t a robust enough process for fixing paint repairs on plastic parts that could pass our quality tests.

“If a bumper was chipped or scratched it’d have to be replaced, the damaged part was then scrapped and sent for recycling. There was truckloads of the stuff being taken away every week and the potential there was massive.

“We asked if we could set up a team to tackle the problem and were told to go for it. We initially thought it would be a doddle…it wasn’t.”

Unfortunately there are always going to be some damaged parts in the recycling bin because they can’t be repaired. Things like cracks or splits could never be fixed, but from the team’s assessment of the waste pile those only made up 10% of what was in there.

The other 90% had small chips that had the potential to be fully fixed and repaired. The team just needed to come up with a filler that was capable of meeting 19 strict quality tests before they could be signed off as an approved product.

And that’s where it started to get tricky.

“We started off by doing a load of research,” said Gary. “We asked suppliers, dealerships and external third party companies that specialise in paintwork repairs for product suggestions. We tested a whole host of them but none got close to passing the quality tests.”

By that point the team were collecting bumpers galore and had roped in help from maintenance apprentices who chopped them up sanded them down.

They had boxes and boxes of them but before each test the team would need to simulate the repair with the different filler products, prime, repaint, clear coat and then oven them. All that before they could even start the testing processes.

The 19 tests take nearly three months to complete in total and by this point the team were testing literally tens of thousands of different samples. They soon realised that they had to find a slicker way of carrying out the tests to save time.

“We couldn’t afford to wait three months for each sample,” continued Tony. “We realised that most of the products were failing on four main tests; humidity, water, stone chip or adhesion. By prioritising these tests we could eliminate potential fillers more quickly in the first two weeks and only then move onto the other 15 tests if needed, which saved a huge amount of time.”

The team came to the conclusion that there was nothing already out there that would do the trick, so invited in four major players in the adhesive filler market to come in develop a custom solution.

Long story short – they came, they tried and they failed.

This was a low point for the team, having worked on finding a solution for so long it seemed that they were beginning to run out of options.

However, determined to see this through they regrouped and went back to the drawing board.

“This forced us to reframe the way we looked at the problem entirely,” said Jay. “And it was then where we had the real lightbulb moment.

“At the time there was a new clear coat being used in the Paint Shop that used humidity curing instead of the normal baking method involving a much higher temperature.”

“Inspired by this we began to wonder if the problem we faced was more to do with the processes we were using for the repair rather than the filler products themselves and wondered if a reduced heat would affect our plastic repair results.”

They decided to test out a plastic part by placing it the oven and on closer inspection noticed a slimy residue that leached out of the plastic at these higher temperatures.

“We spoke to the part suppliers and found that this was a releasing agent that is used to help separate the plastic from their mouldings when they are made,” continued Tony. “We realised that this was preventing the repair filler from properly adhering to the plastic and quickly came to the conclusion that we needed to avoid heat from the process so this didn’t happen.”

The team then needed to find a product that would cure without heat and eventually found one that was actually originally designed for metal repairs not plastics. They decided to test it out anyway…

The repair looked the part and passed the four tests that had tripped up most of the others. When it then passed the other 15 quality tests the team were elated to say the least.

“We then had to get the other areas on board and spread the word that we now had a workable solution for making these types of paint repairs,” said Kal. “It took a little while to get people used to the new process because they’d been used to automatically reordering new parts so we had to get them out of that mind-set.”

The results however soon spoke for themselves and were clear for all to see. Not only have they saved over £400,000 in scrap alone at Castle Bromwich they have also vastly sped up the repair process and have improved quality too.

Where previously bumpers or tailgates would have needed to be removed with all the associated rework and retesting that goes with it, their new process means that plastic parts can be repaired without having to remove them at all.

This saves a huge amount of time, reduces WIP and as the quality of the repair has been so rigorously tested there is absolutely no difference in quality to the overall finished product.

Not content with just benefiting the Castle Brom plant, the team then reached out to their Paint Shop colleagues across the company where they think the potential for savings is even bigger due to higher volume products and increased use of plastics used on SUV tailgates.

With the project going so well the team were encouraged to put in an application for the Innovista Awards and were selected as part of the final 14 who were invited down to present at the British Motor Museum.

“We felt like the underdogs,” said Jay. “We saw three of the other presentations and we were up against some very technical projects from the engineering teams and we wondered how our relatively simple paint repair project was going to compete with that?”

“We actually came back to Castle Brom after our presentation session for our shift before heading back to Gaydon for the awards finals that evening,” chimed in Tony. “When we got back one of the other teams asked us if we’d prepared anything to say if we’d won. I think we thought they were joking as we honestly hadn’t given any thought to actually winning it.

“When our team name was called out, it came completely out of the blue. We were overwhelmed and when the microphone was thrust into our hands we suddenly began to wish we’d come up with something to say beforehand.”

Gary added “You see these types of awards in the company magazines but you very rarely see people like us from manufacturing winning it. We were proud to be representing Castle Bromwich at the event and want to say thanks to all of those who have helped us at the plant. Especially the Paint repair Team who have supported us the whole way through.”

Congratulations on a hugely deserved win.