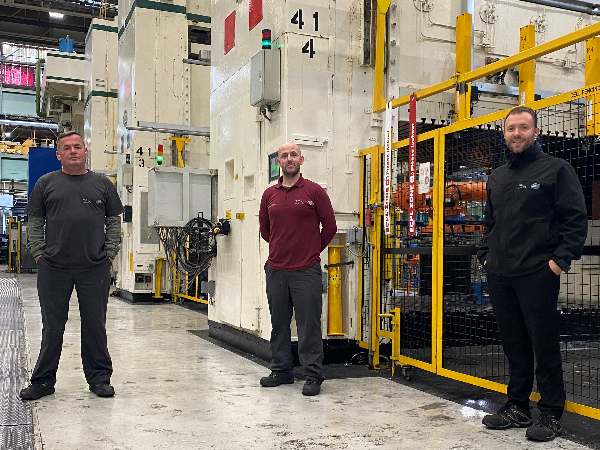 ‘PRESS UP’ TIC TEAM IS RAISING THE BAR ON QUALITY!

Stop the Press… we speak to one of our Fantastic Five’ Halewood circles about their terrific TIC theme which has seen them significantly reduce planned downtime on press line 41, uplift the conditions of the press equipment in their area, as well as upskill associates.

A few weeks ago, we revealed that Press Up- which is made up of Mike Bates, David Farrell and John Kinsella, were one of five Halewood teams being fast-tracked to the TIC UK Recognition Activities, this autumn.

Team Talk caught up with Press Up to tell us more about the success of their innovative idea and how taking part in TIC has helped them to ‘raise the bar’ when it comes to quality, cost savings and confidence.

Press Up’s TIC theme was to create a new process which reduced TPM release time (Total Productive Maintenance) for associates, as well as utilise the time they had during TPM to train associates on how to properly clean press equipment, to bring it back in line with base-line conditions.

Previously there was 24 hours allocated for planned TPM activities for B Shift on Line 41, a line that runs on an average at 263 hits per hour and based on a year, this downtime is an equivalent of 75,744 missed hits a year.

Mike Bates, Zone A Production Leader said: “The TPM wasn’t being used effectively or efficiently and we were confident we could not only reduce the planned downtime on the line but also use the time we had to train associates in the cleaning and maintenance of the press equipment so we could get it back to a higher standard.

“We did a deep clean of the line- to bring it back in line with base-line condition and used the remaining time to upskill associates, who can now identify things like oil or air leaks- which was previously hard to do because of the previous state of the press equipment.

David Farrell, Group Leader on Lines 40 and 41 B Shift, said: “This has resulted in line 41 becoming a much cleaner, safer environment as well as reduce forced deterioration of the machinery, as the line now lasts longer and there are fewer breakdowns as it is being maintained more effectively.

He added: “Downtime on the line has been reduced by eighty percent with an average of 4.8 hours planned in for TPM each month. We are now maintaining a higher standard on the line, we don’t have to release people as often to clean it, which means it can run for longer with fewer breakdowns.”

Press Up will form part of the 32 top circles who are progressing directly to the TIC UK Recognition Activities, later this Autumn. This will include a JLR off-road driving experience at Eastnor and they will also get the opportunity to present their TIC theme to a member of the Board of Directors.

Asked how he found taking part in the TIC process, John Kinsella, Zone A Production associate, said: “Before TIC, I had only worked on the line and hadn’t done any form of presenting before, so it took me out of my comfort zone and allowed me to develop new skills.”

“It’s been an engagement enabler with myself and the other associates, as through our circle, I’ve been taught how to raise maintenance issues as well as being trained up to drive a cherry picker driver- something I didn’t’ think I would get to do.”

Mike Bates added: “TIC has been an incredible development opportunity for both Dave and John as they have both come on so much in terms of confidence- which has been brilliant to watch.”

“For Dave, it’s been seeing how he has collaborated with different teams and ensured the timings and project were on plan. For John- last year, presenting for him would have been unheard of and something he didn’t think he could do, but he rose to the challenge and I’m so proud of them both.”

Getting involved in continuous improvement through TIC is a key way that employees can play their part in Refocus to improve the quality of our processes, reduce cost and ensure Halewood is in the strongest position to successfully embed the electric architectures earmarked for our plant.

10
Colleagues in Slovakia give the New Defender a warm welcome