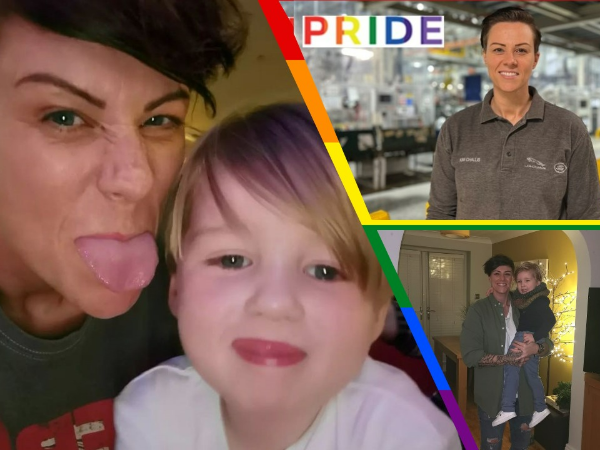 PRIDE IN OUR PEOPLE

June marks Pride Month, so Team Talk took the opportunity to catch up with our local Halewood PRIDE Network, who would like to share with ‘pride’ their LGBTQ+ personal experiences of working in manufacturing.

Kim Challis heads up our Halewood PRIDE Network and is also a Production Clerk in Body in White. Mum to three-year-old Reggie,, Kim shares with us her story - one she hopes will encourage employees to feel more open about discussing their sexuality at work, as well as raising awareness of advice and support available through our local Halewood PRIDE Network.

Were you open about your sexual orientation when you started at JLR?

“Yes, I’ve always been open about my sexuality. I officially ‘came out’ when I was fifteen and I’m very fortunate to have an amazing, supportive family and set of friends around me. I’ve always felt able to be myself and express myself!”

What was your perception on starting work and how being gay would be received by your team mates?

“It wasn’t something I put loads of thought into, really. I was a bit naive in thinking: ‘Well, why would there be an issue? It’s just me.' I was more worried about how I would fit in in other aspects, as opposed to the fact that I was gay. I’ve known I was gay since I was a teenager - for other colleagues this is the first time they’ll have heard it. I suppose now I worry more about people thinking that anything I achieve is not because of the effort I put into my job everyday but because I’m gay and female.”

How was being gay received by your workgroups/peers?

“I’ve never introduced myself as:  ‘I’m Kim and I’m gay’, so I guess people just assume you’re straight, which is something I am guilty of sometimes too. It came out automatically, after talking with people, getting to know them and talking about general life, when I would drop in the word ‘her’ instead of ‘him’ referring to my partner. All of the people I have worked with on the shop floor have always accepted me for who I am and have never made me feel singled out or uncomfortable in any way. If ever anyone has questions, they ask and we talk about it.”

Have you got anything to say to anyone in a similar situation as you or to your colleagues?

“Things seem a lot worse in your mind than the actual reality of it. Don’t feel pressured, just be you. If you ever have any questions then ask, don’t feel worried about approaching any subject or situation to someone. We also have our PRIDE Network on site, for anyone who wants to speak confidentially to someone, get advice or offer support to others. Just to be clear, you don’t have to be LGBTQ+ to join the PRIDE Network - it’s there for anyone. As we strive forward with our company purpose to deliver the exceptional with soul, we are calling on everyone to come together to create a diverse, safe space where we can celebrate and share our experiences and champion change and inclusivity as a united workforce.”

Do you want to get involved? Complete this form or email JLRPRIDE@jaguarlandrover.com