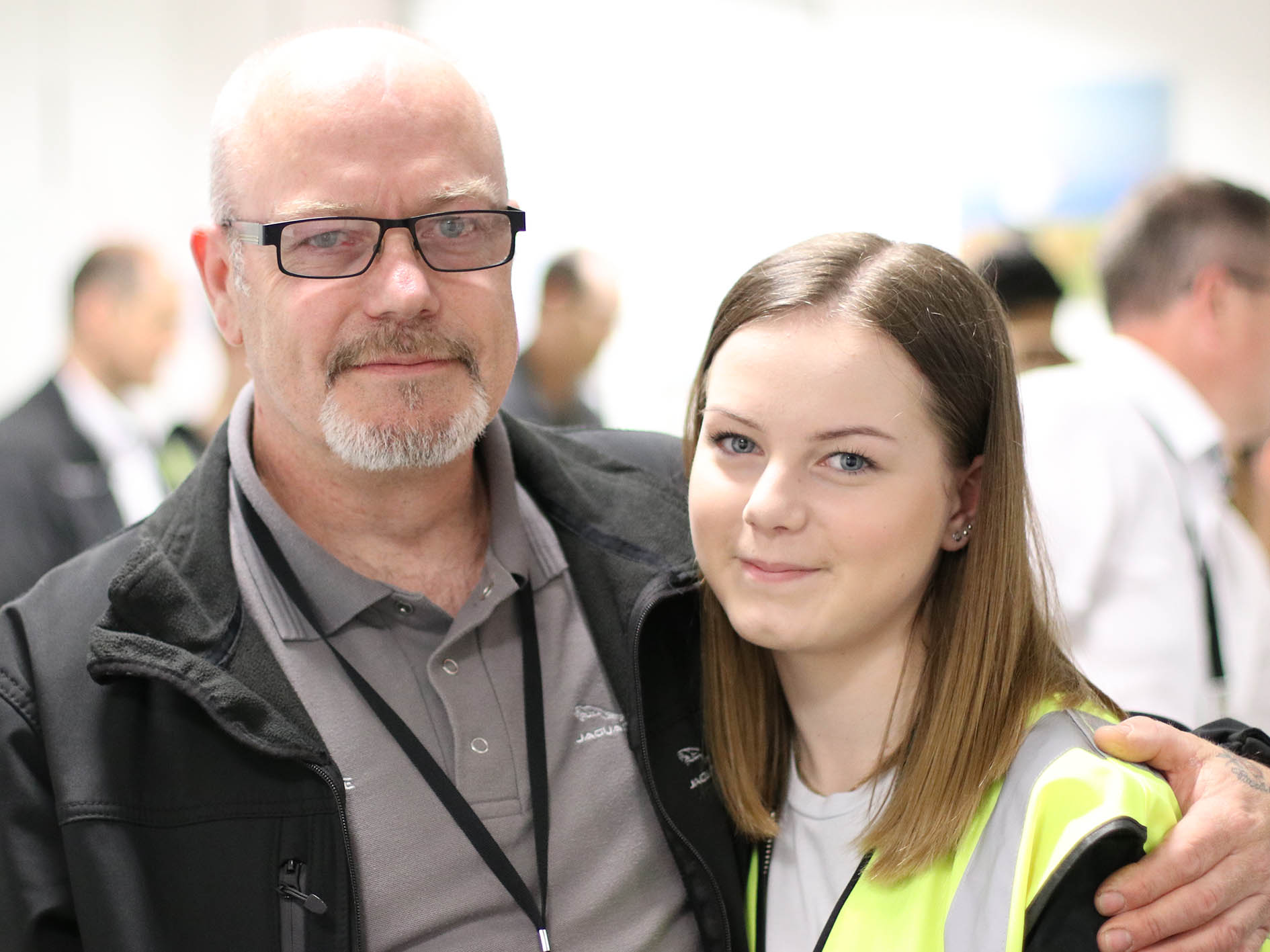 This year’s Sons and Daughters to Work Day was the biggest ever for the facility’s Education Business Partnership Centre (EBPC), with 16 young adults attending to see what their relatives got up to whilst at work.

The budding apprentices, designers and engineers, took part in a range of activities throughout the day. These included having a guided tour of the facility to gain a better understanding of what it takes to run a world-class manufacturing environment. Some were even lucky enough to spot their proud parents on the way round, with People Talk there to capture the moment.

A visit to Dexterity Development proved a true test of skill where, joined by their parents, the youngsters pitted their wits against the clock on a range of tests, designed to mimic the production line process.

EBPC Centre Support Officer Claire Scott-Jarvis said: “One of the aims of Sons and Daughters to Work Day is to inspire the next generation, by encouraging colleagues to look at the opportunities for careers at Jaguar Land Rover for their children. It proved a great success, with all those taking part saying how much they enjoyed the experience.”

Poppy Payne, 14, lives in Bearwood and is the daughter of Total Production Maintenance’s (or TPM for short) Mark Payne.

Poppy is adamant she wants to work at the facility, following in the footsteps of her dad, and her brother who also works at the EMC. When Mark saw the email about the opportunity he knew he had to tell Poppy to apply.

He said: “’I’ve always been quite mechanical, fixing old motorbikes in my spare time. Poppy has helped me since she was about four or five, so she knows more than I ever did when I was her age. I think she’s really enjoyed the visit. She even bought new shoes for the occasion. I’m very proud of her.”

Poppy said: “I’d like to apply for the apprentice programme when I’m old enough, as I’m keen to join my dad and have a career at Jaguar Land Rover. It’s been a great day, I’ve really enjoyed it.”

Phil Ackerley, lives near Shrewsbury and works on the head line at the EMC.

His son Liam, 12, was one of the day’s youngest attendees.

He said: “I’ve been working here for nearly a year now, having spent 22 years in the RAF, including five years with the Red Arrows.

“It’s great to get back into engineering following my retirement from the military.

“Liam wanted to see where I worked, so we applied for the Sons and Daughters to Work Day and it was great that he got selected. I work closely with one of our current apprentices Ben Brown.

“There aren’t many 20 year olds who can say they’ve had the same opportunities to earn good money while study for an apprenticeship.”

“The day has helped me to consider engineering as a future career.”

Serwen Kang is 51 and has worked at the EMC for four years, in assembly hall operations. Before he joined Jaguar Land Rover he was a business owner.

Son Arjun is 14 and wants to pursue a career in product design and engineering.

“Arjun’s always been interested in cars, he’s doing engineering as a GCSE option, alongside maths and science.

“We live not far from the facility and Arjun attends St Peter’s school, so he’s seen the growth of the EMC over the last few years and has showed an interest in coming to see the facility.”

Arjun said: “It’s been great to explore the EMC and see around the site.

Stuart May is a quality engineer working at the EMC. He’s been with the business since October 2016 and wanted to encourage his son, James, to come and see where he worked.

He said: “I started working at the facility on the crank line, although I moved quite quickly into working on SAP in the quality team, which is a really challenging role.”

James, 14, wanted to see what his dad did and look at the possibility of applying in the future.

He said: “It’s my second career choice, if the footy doesn’t work out. I’m planning to study design and technology in the future. I’ve really enjoyed the day, I even liked the canteen food. It seems like a great place to work and I’d potentially consider following an apprentice route.”

Emily Leeks is the daughter of the EMC’s Operations Director Trevor Leeks. She was keen to attend the Son and Daughter to Work day to find out more about future careers with Jaguar Land Rover.

“She said: “Jaguar Land Rover is a massive company and there are so many different departments. It’s been great to get an overview of the operational side, but also look at other opportunities.

“I’m keen to follow a career in law, so it’s great to know that I can still look at joining the business in one of the many support areas.”

Trevor said: “It’s great that we open up our facility for Sons and Daughters to Work Day. I’m glad to see so many have enjoyed their experience and wish them all well in their future careers.”

I’d like to apply for the apprentice programme when I’m old enough, as I’m keen to join my dad and have a career at Jaguar Land Rover. It’s been a great day, I’ve really enjoyed it. 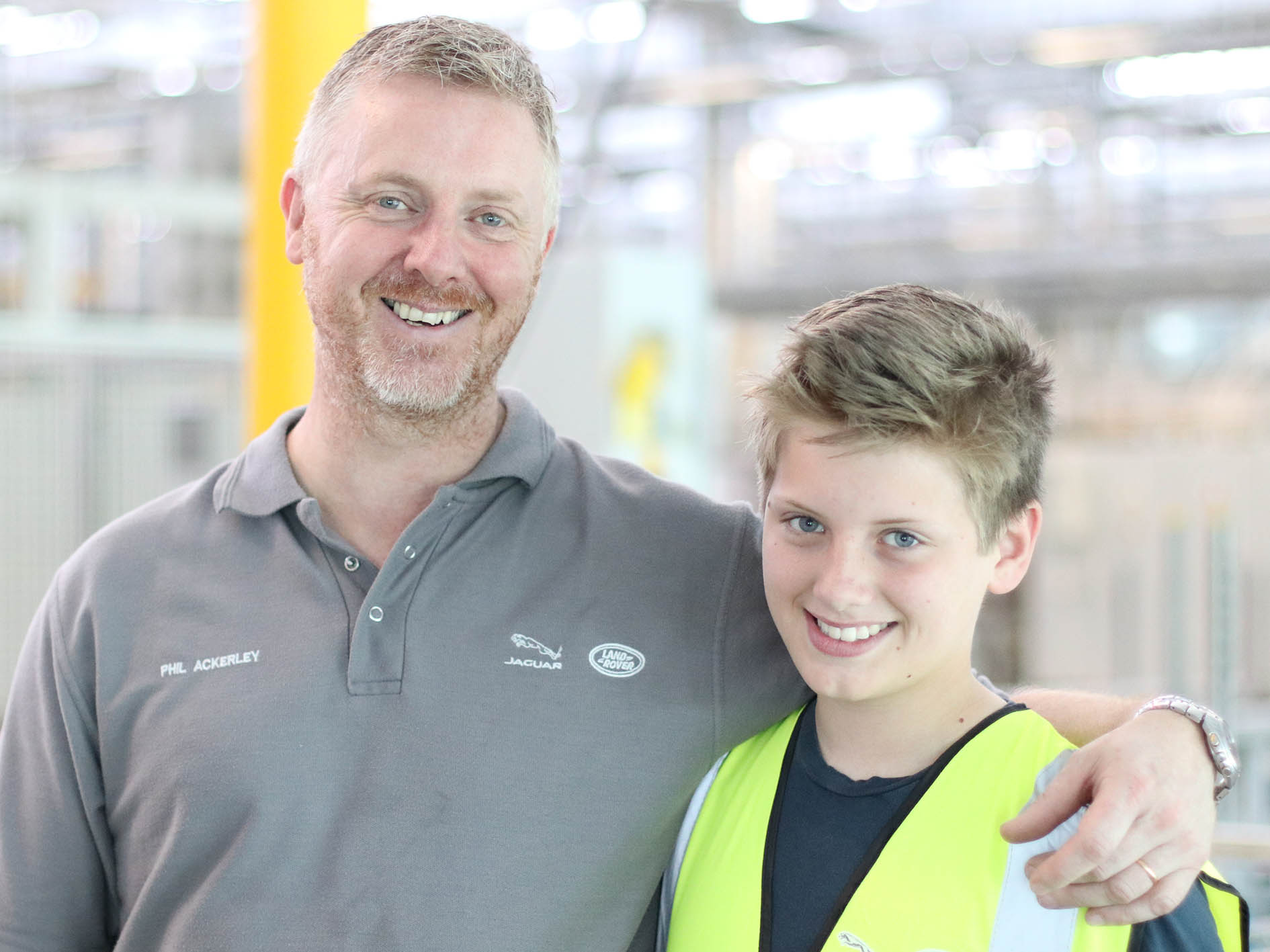 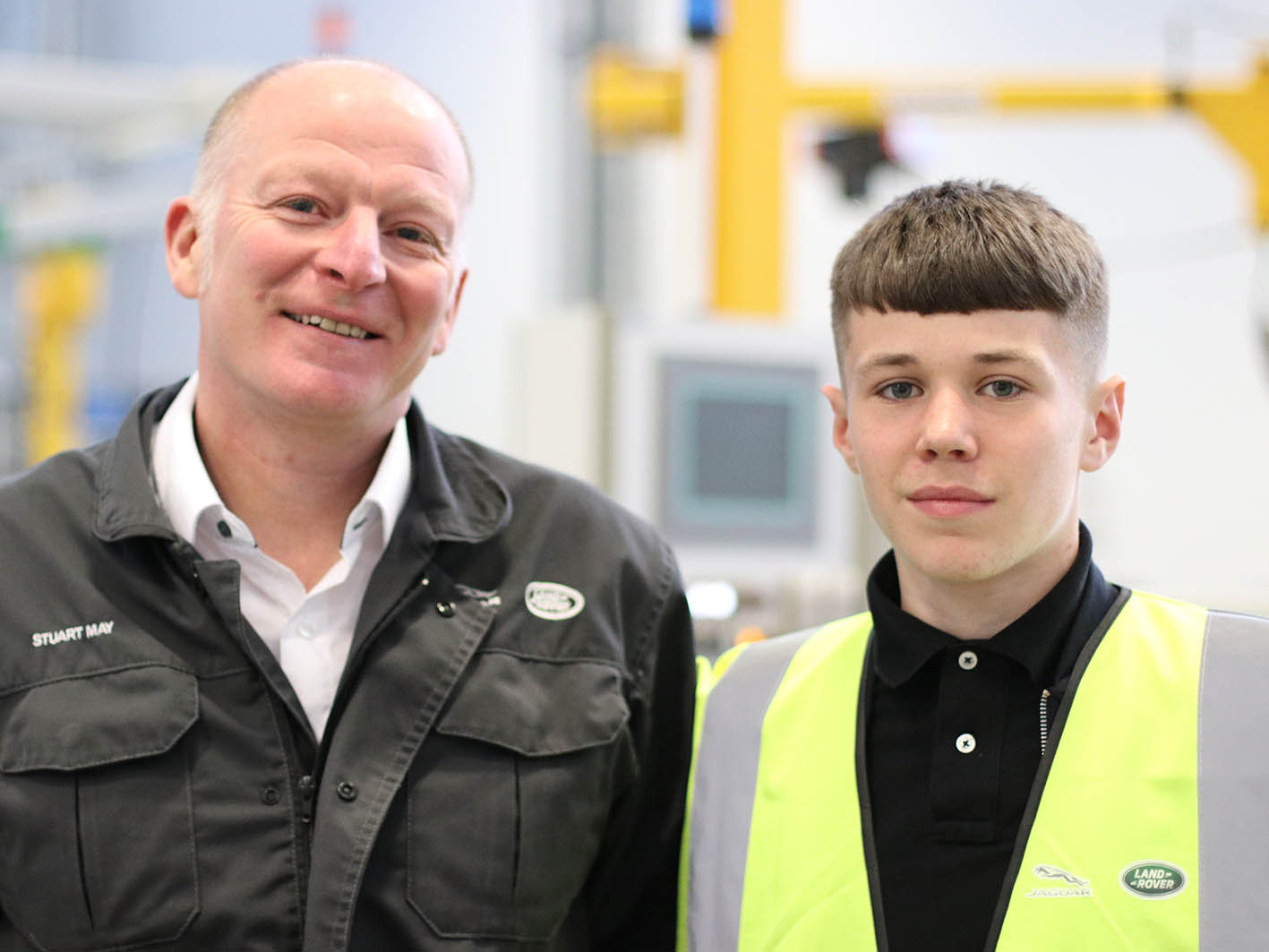 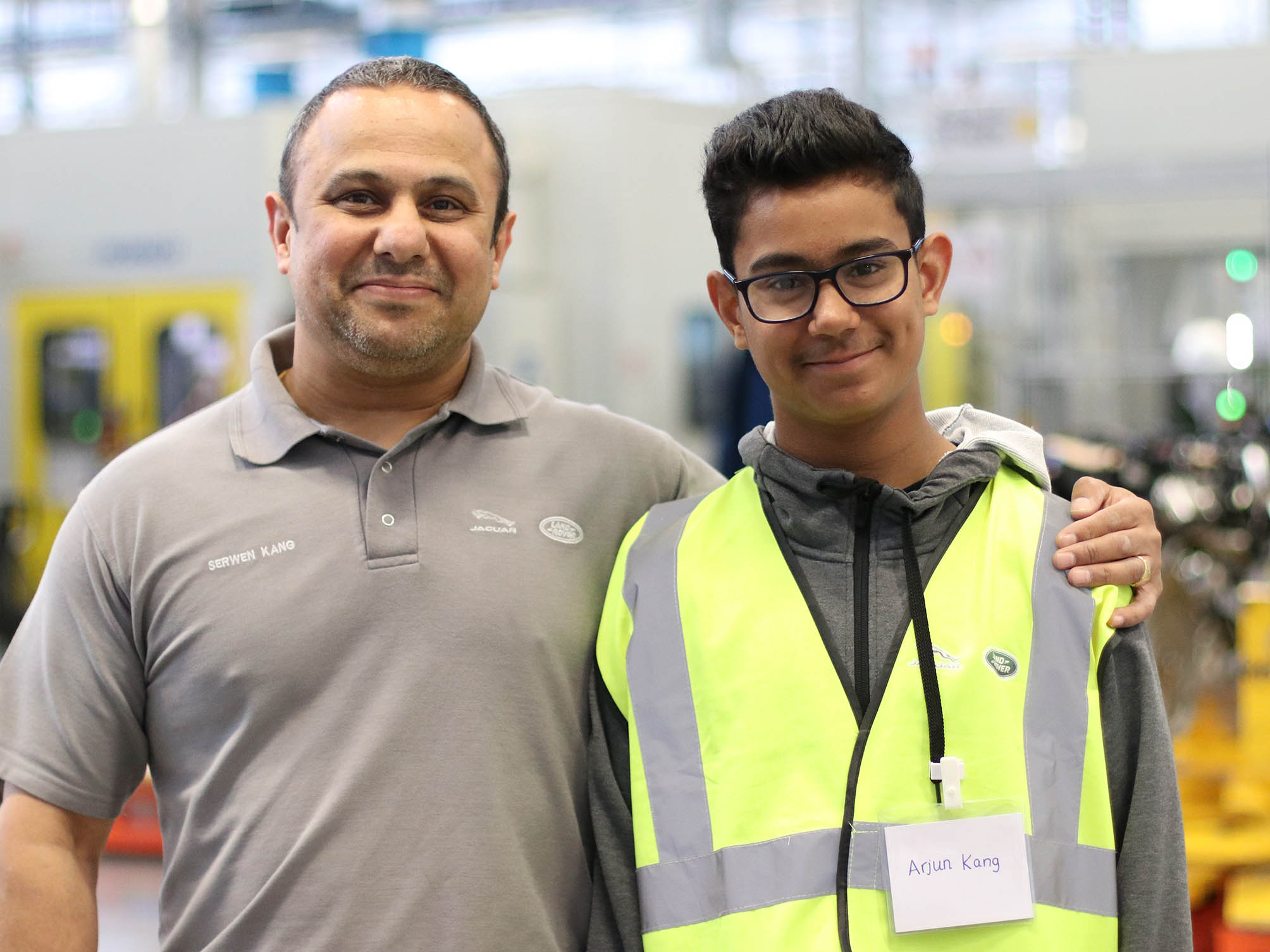 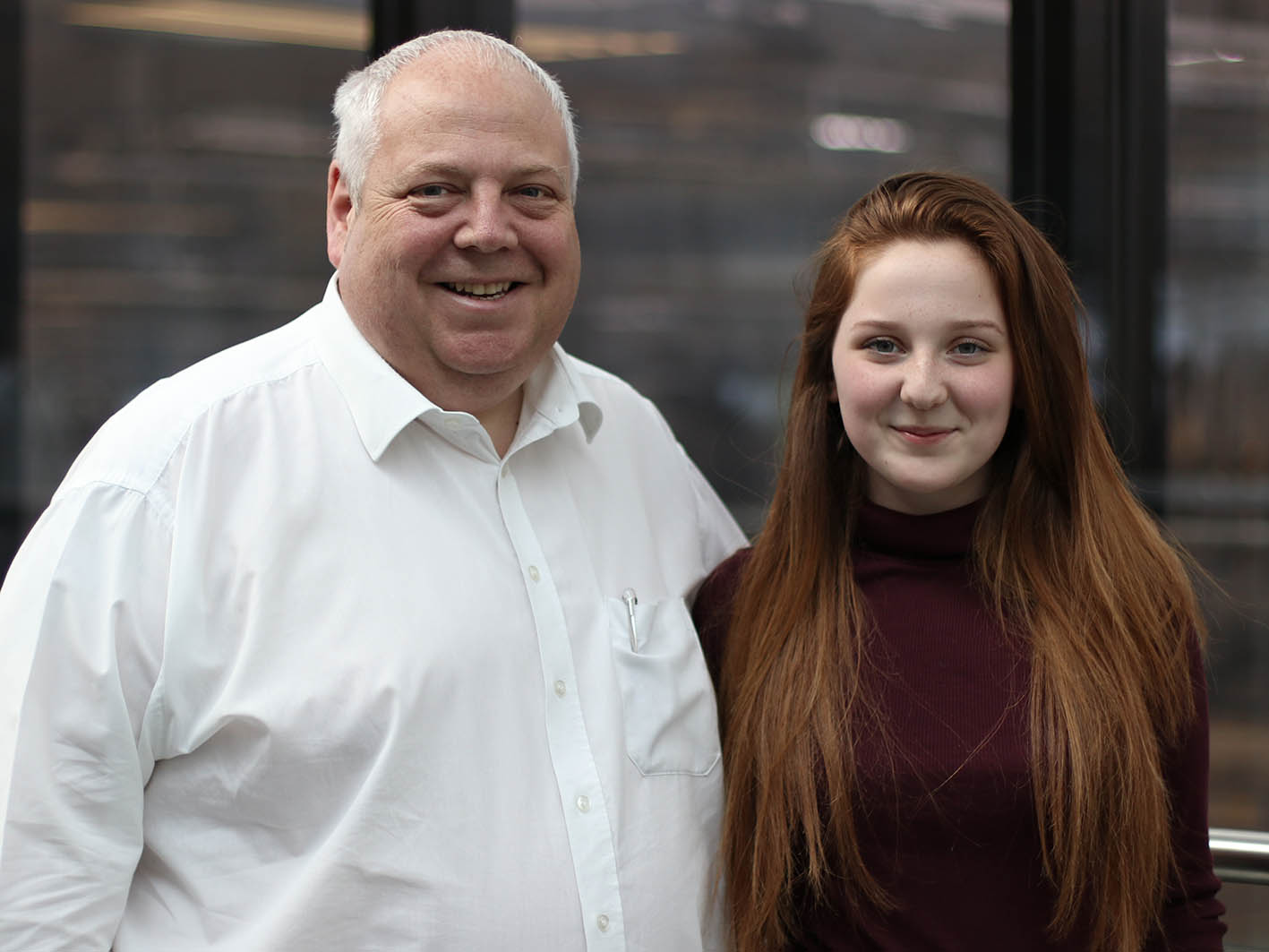 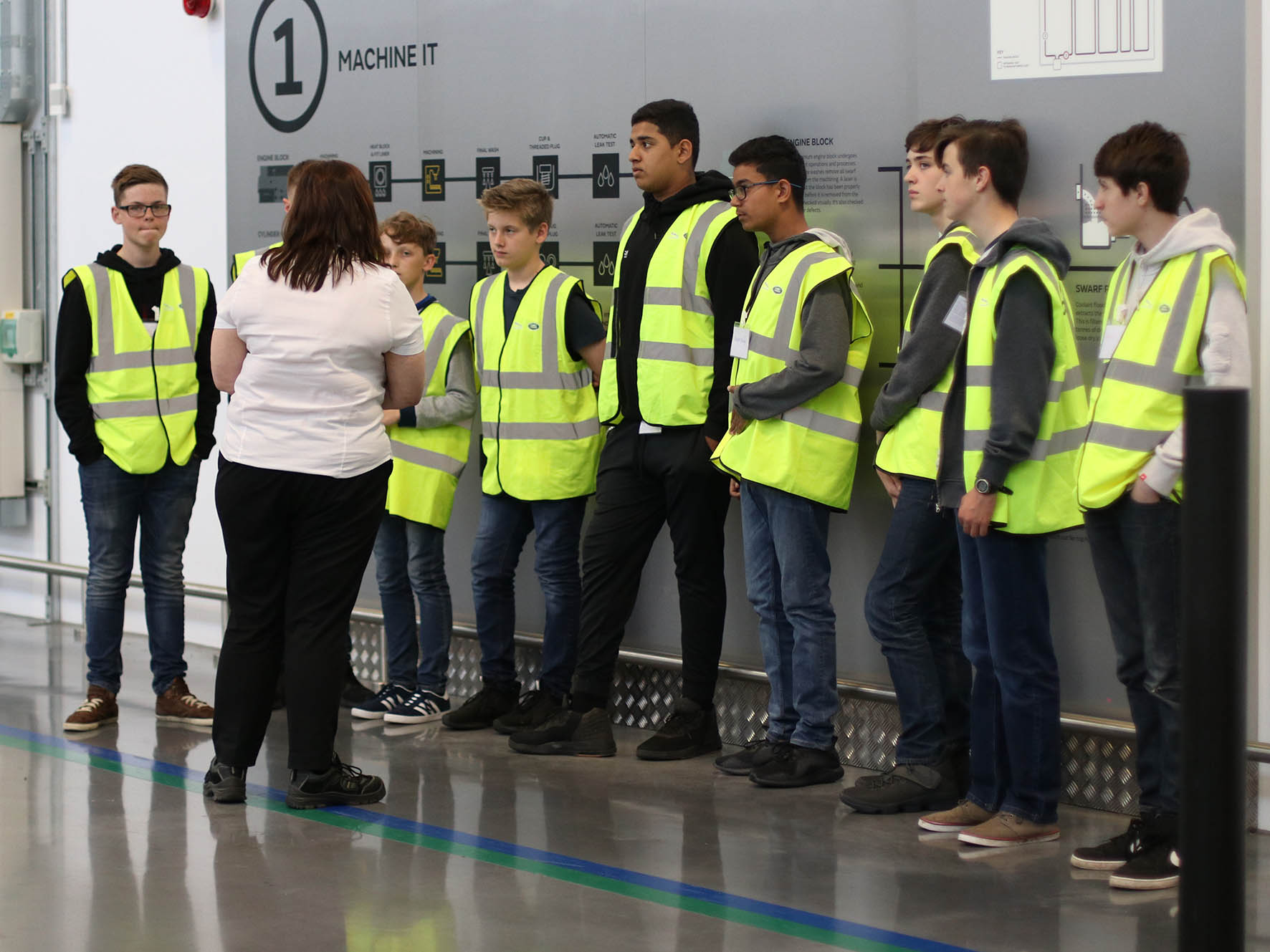 2
WORKING TOGETHER MAKES LIGHT WORK OF ROBOT SWAPS AT SOLIHULL