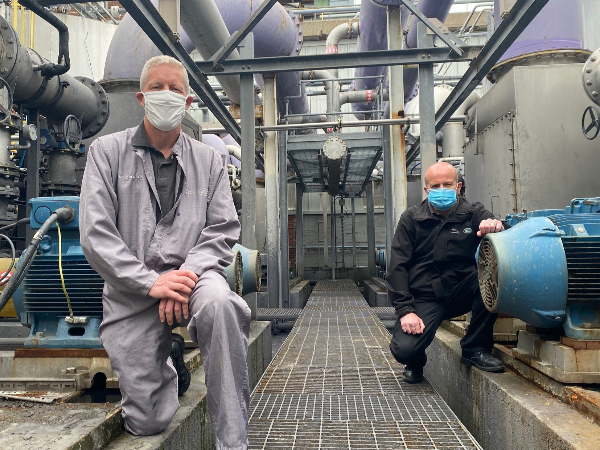 PUMP IT UP! HOW THE PAINT SHOP HAS ‘PUMPED UP’ ITS ENERGY AND COST SAVINGS

It goes without saying that the team in Halewood’s Paint Shop are a thrifty bunch. Over the last 12 months, the new software programmes they have put in place have not only helped to significantly reduce the factory’s carbon footprint by 2,700 tonnes but have also resulted in £1.2m in cash savings.

They have done this through various initiatives, including reducing fan speeds, installing new chillers and introducing smart oven controls on a timer system, to name a few.

However, one of the most recent projects has seen the department lower the pressure of its water pumps in the spray booths from 1440 RPM (Revolutions Per Minute) to 1220 RPM during non-production.

Neil Benson, an electrical engineer in Paint Shop, who created the programme, and this year celebrates 36 years at Halewood, spoke to On Track about how small changes can have a big impact.

Neil said: “Lowering the pressure of the pumps by just under 200 RPM might not sound like a lot but by doing this, the power of the motor which turns the water around the system, drops by 50 percent. So, it halves our process energy output as well as saving Halewood £23,000 a year in electricity costs.

Explaining how it works, Neil said: “The logic is simple- if there isn’t a car in the booth being painted, the pumps don’t need to work as fast to circulate the water around the system, so can therefore be switched to a lower pressure setting.

“In the past the pumps were kept in a higher-pressure mode for 24 hours a day, even during non-production, as that’s the way it had always been done.

“However, since integrating smart controls and software into our systems, we have the ability to change and challenge processes- something which is being actioned right across the department.

Neil added: “We have seen a real evolution in this energy saving mindset over the last few years and it’s exciting to see how far we have come. The quality of the kaizens that are being actioned to help make Paint Shop a more cost-effective and sustainable department are second to none.”

Dave Buxton, maintenance manager in Paint, said: “Neil and I started at Halewood on the same day 36 years ago and it’s fair to say a lot has changed since then. However, one thing that has remained constant is his exemplary performance and commitment to continuous improvement.

“We need to use our resources responsibly and Neil has the team challenging everything they do. We have surprised ourselves by how much can be achieved by investing time in what opportunities are out there to save energy and money across the department.”

“Halewood emits 80,000 tonnes of CO2 every year and has developed a strategy to  become the first JLR zero emissions factory by 2030.

“One of the main ways we will achieve this is through reducing our process energy by 30 percent and the work which is being delivered by the Paint Shop team and other departments across the plant, are playing a crucial part in this journey and show how marginal gains can deliver huge carbon and cost savings for Halewood.

“This is not only the right and responsible thing to do but will also allow us to drive sustainable profitable growth for our business, which is key in safeguarding our position as the plant of choice for Jaguar Land Rover.”

“We have seen a real evolution in this energy saving mindset over the last few years and it’s exciting to see how far we have come. The quality of the kaizens that are being actioned to help make Paint Shop a more cost-effective and sustainable department are second to none.”