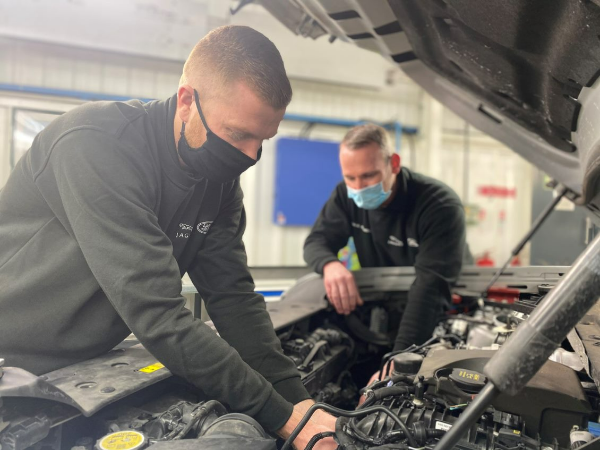 The Plant Vehicle Team (PVT) reached a major milestone this month after breaking their £250,000 savings target and reaching a massive £320,000, following the roll out of an innovative new quality programme which saw them bring customer repairs in-house to Halewood for the first time.

The team converted the former PVT workshop-previously used for carrying out engineering activities in the plant - into a real-life retailer. So instead of paying an external supplier to carry out repairs to customer vehicles, cars have been taken directly to the PVT Halewood workshop, where they have been fixed by our own talented technicians and engineers - at a greatly reduced cost.

The project has been running since October 2020 and during that time, over 380 customer cars have been made their way through the Halewood PVT workshop in this tremendous team effort.

As well as repairing customer vehicles, the team has also made additional savings by bringing warranty repairs and services for over 140 manager cars in-house to the PVT workshop.

David Parkinson, Halewood PVT manager, said: “The team has done an outstanding job and has worked tirelessly to make this monumental cost saving for Halewood.”

“Rather than fork out large sums of money for another company to fix our customers’ cars- who better to repair them than the people who have helped to build them?

“This project has allowed us to utilise the talent of our Halewood technicians, as well as our own tools and material- driving quality and efficiency.”

Adopting a responsible spend mindset and reducing waste and cost is key to delivering Refocus, which will allow us to transform the way we operate, so we can be in the strongest position to successfully rollout the electric architectures earmarked for Halewood.

Dave added: “What started as a cost saving project has also developed into a quality and engagement driver for the team. It’s given them the opportunity to upskill, by working on other Jaguar Land Rover models and they taken pride in the role they are playing to make improvements to the quality of our processes. They know that behind every one of the cars, there is a customer, and their work is playing a huge part in that satisfaction journey.”