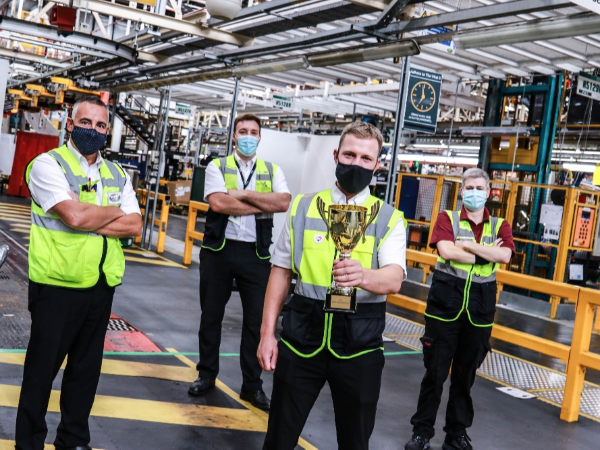 QUALITY FIRST: COMING TOGETHER AS ONE TEAM PROVES KEY IN SOLIHULL'S FA2

Since the start of April, teams across Solihull have answered the War on Quality call to action, and have been busy transforming quality in their area.

Taking on the mantle, Solihull's Final Assembly 2 (FA2) team came together as one team to focus on ways they could make the biggest transformation to quality in their area. They found that electrical connections were one of the biggest areas to focus on, as well as improving equipment such as Teradyne.

FA2 Production Leader, Brad Harber has been leading FA2’s charge to transform quality. Brad explained, “Improving our quality is critical to our future and we set about understanding how we could improve things quickly.”

Transformations to electrical connections have seen weekly connection performances increase to 99% - a record for FA2. Along with a focus on connections, FA2 has been looking at everything else they do with a critical eye on quality.

Brad continued, “Teams have implemented kaizens with magnetic plates to save bolts dropping in the car. We’ve also sent some of the on-line team to the Off Track to raise awareness of how complicated and long rework can be.”

Coming together as one team has proved key to FA2’s success. Not only have they all been working along side each other to make improvements but working hand-in-hand with support teams such as Engineering and Supplier Parts Quality has been vital.

After collecting the award on behalf of FA2 Brad concluded by saying, “This award is testament to all of the hard work everyone associated to FA2 has put in. We’ve got a long way to go to get to where we want to be, but if we continue to work together I’m sure we’ll be successful.”

Keep reading Team Talk to find out who wins the War on Quality award next week.

How are you transforming quality in your area? We want to hear your story. Email us at Solihull@jlr-colleaguecommunications.com.

View more
18
A journey of innovation from Mexico to Solihull