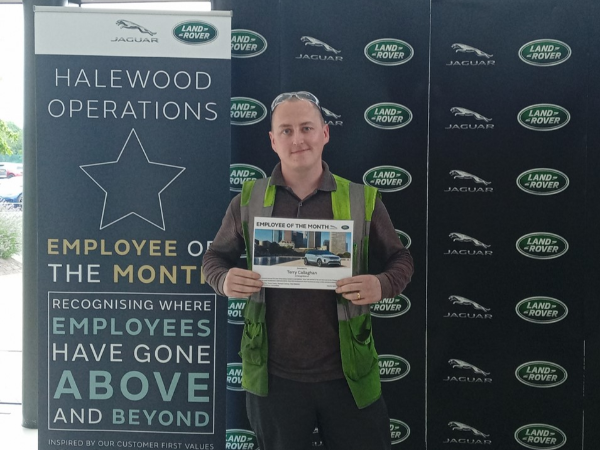 RAISING THE ROOF WITH OUR FIRST EMPLOYEE OF THE MONTH!

Last week we celebrated Halewood’s first Employee of the Month recognition event, which will help us to showcase more of the brilliant work being delivered by our colleagues on and off the shopfloor!

It was Body in White’s Terry Callaghan who was crowned winner for his incredible idea that has seen the department’s scrap savings go ‘through the roof’.

Terry, who is a trained welder, developed a new repair standard from scratch (most of it from home) which has significantly improved the laser braze defect fallout rate, on the fixed roof of the Evoque. This was an ongoing quality issue that was costing the business over £55,000 a year in scrap costs alone!

He has now trained associates across different shifts in the process so they can successfully carry out the repairs. And since Terry’s terrific idea has been rolled out, the department hasn’t had to scrap a single BIW unit due to a laser braze defect!

Terry said: “It’s a real honour to be named as the first Employee of the Month for Halewood as there were a lot of great contenders in the mix. I’m proud that I could utilise my skills and training as a welder to help the business make improvements to an existing process which has also resulted in a substantial cash saving."

Quality is everyone’s responsibility, and this is a brilliant example of someone going above and beyond, taking real pride and responsibility in our business and challenging the norm. Congratulations Terry and a huge well-done to all our finalists including; Sam Divine, from Trim & Final, Phil Douglas, from Tooling & Press Parts Group and Ian Thompson from Plant Quality.

Like with Kaizen of the Month, social distancing restrictions has meant we are running a few months behind the official Employee of the Month launch and have some catching up to do in Team Talk over the next few weeks -so stay tuned!