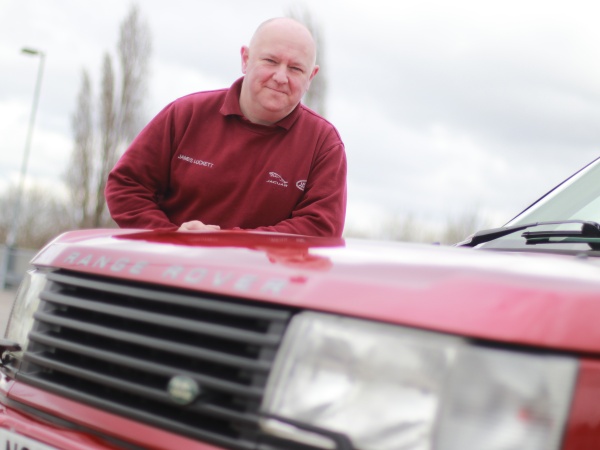 RANGE ROVER RUNS IN THE FAMILY AT SOLIHULL

This year, we’re marking 50 years of Range Rover by telling your stories from five decades of our landmark SUV at Solihull. We spoke to James Luckett, a Group Leader in FA1 about why his love for Range Rover is a real family affair.

Having grown up just a stone’s throw from our Solihull plant, FA1 Group Leader James was around our landmark vehicles a lot during his childhood. Now, whether it’s building them in FA1 or restoring his own P38 at home, Range Rover continues to play an important part in his life.

James explained, “Land Rover has always been a massive part of my life. I grew up in the 80’s and have lived in Solihull, right next to the plant, all my life.”

Besides living nearby, James has always had a strong a family connection to the company. “I am the second generation of our family to work here. I’m not entirely sure when my father joined the plant, but my family tell me he had over 35 years’ service. Both of my brothers have worked here and one of them is still here at Solihull. I’m even told that my mother worked at the plant in the 70’s, building the Range Rover Classic. I’m not sure in total how much service we hold collectively as a family but it would be interesting to find out!”.

Working for JLR, James’ father would come home with cars from the plant from time to time, and that’s where his love affair first started. “I remember on rare occasions my dad would come home in a Defender he had borrowed from someone at work. I fell in love with the cars. Then, as a teenager, I remember going on-site with my father to see the Judge Dredd vehicles that Land Rover produced – in fact, I’ve still got a photo of me standing by one.”

James’ father retired in 2001, but James carried his love for the brand throughout his early career. “I worked as a catering manager for a number of years, as well as being a volunteer police officer. Unfortunately, my dad passed away in 2009, but his passion had always made me want to join the company. Eventually, in 2013, I did just that – starting at Castle Bromwich and transferring over to Solihull after a year. I’ve now worked in the company for seven years and have proudly progressed to Group Leader.”

James’s love of Range Rover has only grown stronger over the years, but until recently he’d only helped to build them. Then, in 2015, he got the chance to own a Range Rover of his very own. “A friend of mine called me to say he was getting rid of his old P38,” James explained. “It was a 4.0 litre v8 from 1996, but it was ready for the scrap yard. I told him I’d take and since then, I have worked over countless weekends to restore it.”

The work has been a labour of love for James, who his now passing on his passion to the next generation. James continued, “My eldest son has started getting into Range Rovers, just as I did when I was his age. He’s only 8 years old, but he has started to work on the car with me. Range Rover is in my blood, and I’m proud that my love for this iconic brand is now moving down to my sons.”

Do you have a Range Rover story that you want to share? Let us know by sending us a message at Solihull@jlr-colleaguecommunications.com.

Range Rover is in my blood, and I’m proud that my love for this iconic brand is now moving down to my sons.