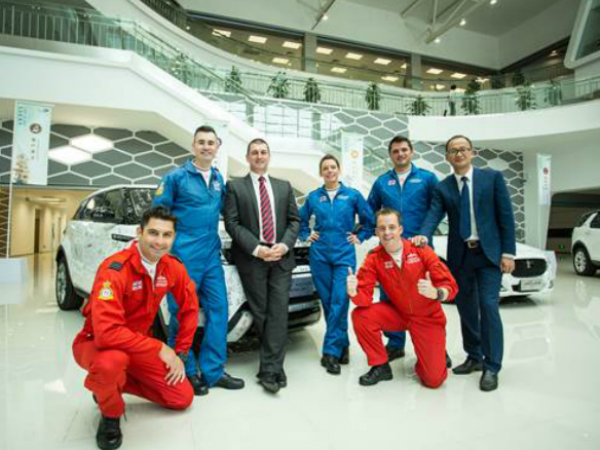 On 6th November, the Red Arrows Aerobatic Team of British RAF was invited to visit the Chery Jaguar Land Rover production base in Changshu to experience the excellence of its global uniform manufacturing and leading concept of corporate culture.

Pursuing Dream in the Sky for Creating a Legend

The official name of the Red Arrows is Royal Air Force Aerobatic Team (RAFAT), which is the symbol of speed, agility and precision by RAF. Since its establishment in 1965, Red Arrows has completed more than 4,800 performances and repeatedly performed major missions of international aviation, thus becoming the pride of the RAF and even the entire UK.

In the 2016 China International Aviation and Aerospace Exhibition (Zhuhai), Red Arrows paid its first visit to China, and its fantastic performance left a deep impression on domestic aviation fans. During this period, Jaguar Land Rover provided a fleet support as a long-term partner of Red Arrows.

Excellence in Manufacturing Driven by Culture

Red Arrows and its party also visited Changshu production base accompanied by the leadership team, having an in-depth experience of Chery Jaguar Land Rover’s quality manufacturing system under a global uniform standard. At the end of the visit, Red Arrows team members witnessed the upcoming new Jaguar XEL in the T&F Shop. With advanced production process and stunning appearance, Jaguar XEL won unanimous praise from the Red Arrows team members alike, and attracted the first batch of fans before the market.

The success of Red Arrows stems from its ultimate pursuit of speed, agility and precision, while Jaguar Land Rover is also the practitioner of ultimate performance and quality. As a representative of the British automotive industry, Jaguar Land Rover continues to apply cutting-edge aviation technology to automobile manufacturing and goes on to enhance automobile performance. Chery Jaguar Land Rover introduced the most advanced aviation-class self-piercing riveting technology of Jaguar, and used it in the smart aluminium body structure, perfectly interpreting the speed, agility and precision of land-driving.