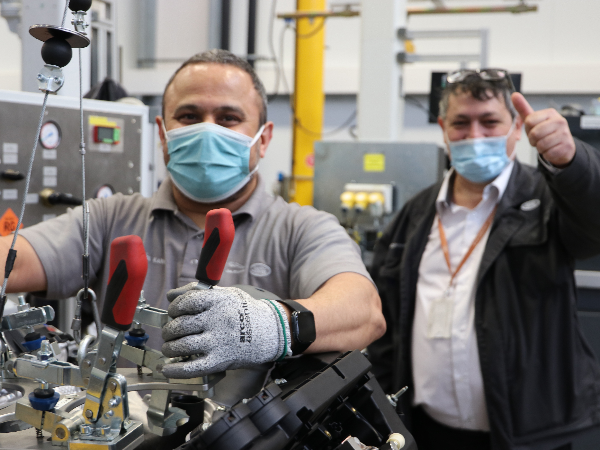 Last year, Engine Manufacturing Centre's Cristi Pantazie was hailed as the plant’s very own Inspector Gadget for his Kaizens and inventions that made great improvements to our processes. Now, he’s back in 2021 with with a triple-whammy after his most recent improvements on the new V8 engine line around ergonomics, cost and cycle time went down a treat with colleagues.

The oil cavity leak test process on station 2260 (zone 2) on our new AJ133 line at the Engine Manufacturing Centre (EMC) is an extremely important process as it tests for any oil leaks coming from our engines.

When Cristi observed the process, he knew there were improvements he could make to make the process more efficient.

The dad-of-two first identified that he could eliminate travel time to collect the vacuum pump from the shelf with parts meaning the operator would no longer travel to lift the pump because the part rack would be relocated close to its essential position.

He then worked to attach the inlet clamp device to a spring tool balancer, which reduced the cycle time by a whopping 15 seconds.

Along with other repositioning of tools, Cristi’s changes proved a hit with the process operator Serwen Kang who works on this station.

That wasn’t it for EMC’s Inspector Gadget though. He couldn’t complete the project without throwing in yet another tool improvement to drive down cost savings.

He noticed that rubber clamping heads from the Inlet Clamp Tool were becoming worn after extended use so he fitted them with gasket connectors to ensure they could be used for much longer without wearing down.

This was costing us over £1,600 per year, but with Cristi’s genius improvement, the combined cost saving associated with cycle time, down time and material costs related to his improvements totals £53,900 per year.

His commitment to Refocus has resulted in a hat-trick of improvements that have saved on cost, improved a process to make it more ergonomically-friendly for the operator and reduced the cycle time by 35 seconds per engine.

Since Cristi worked on improving this process, not only can I carry out the process much quicker but it’s much more ergonomically-friendly, I’m not having to lift the inlet clamp as it’s attached to balancers above the engine now and there’s much less twisting and turning involved in the process to reach parts or tools.

View more
3
Halewood charity of the year 2018 - who will you nominate?