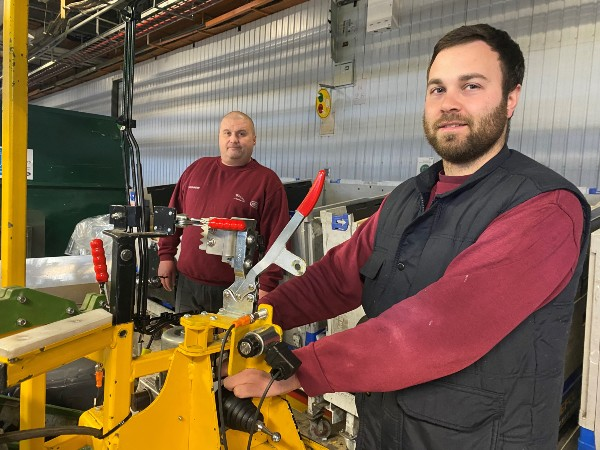 We meet the team who have shaved 250 minutes a day off their process by introducing sustainable packaging on the ABC Subs station in Trim and Final and are helping to bring Refocus to life at Halewood.

Excess packaging had been causing a variety of problems on the line for the T1 G7 associates as brake pipes used to be delivered inside large plastic bags which were taped up at the top and needed to be ripped apart to get them out.

This was having a significant impact on quality of the parts which would often become snagged and bent out of shape. The plastic would also soon accumulate into an unsightly mess behind the workstations, and as there was no space to store it, would be disposed of without being recycled.

After taking part in a Kaizen Sprint, Darren Brown and the T1 G7 team took advantage of having Jack Traynor and other representatives from MP&L in attendance and asked if the plastic packaging could be replaced with layers of cardboard.

Fast forward a few weeks and the new design is in place and plastic is a thing of the past!

Darren Brown, who led the team alongside Callum Hounslea, said: “For us this has been win-win as not only have we cut down on our plastic waste and improved our sustainability- which is at the heart of JLR’s Reimagine strategy- it’s also improved the efficiency and quality of the process on the line.

“We are no longer damaging the break pipes and getting them out is much quicker as they aren’t taped up anymore, so it’s saved time- on average 30 seconds per car- which works out at 250 minutes per day.

Callum added: “The sustainability and cost savings don’t stop there as it’s also reduced the amount of deliveries to the Sub station because you can get more pipes inside the boxes with the cardboard layers than you could when they were transported in the plastic bags.

“It’s also smartened up the work area and given us more space, so we now have time to build the brake system before it goes on to the car- and it’s also given us the flexibility to take on more work in the station to assist with the efficiencies.”

Jack Traynor, project engineer in MP&L, said: “By simply replacing the packaging with a cardboard solution, we have been able to remove 1860 plastic bags a year from our supply chain, on just this one process alone. We have also been able to save an additional £520 a year in packaging by making the switch- it’s not a huge amount but if this could be rolled out on similar processes- imagine the difference that could make.

Jack added: “A huge thank you to the team for highlighting the waste and going forward we are looking to improve the communication channel between production and logistics engineering using PowerApps to ensure we can review and feedback to these proposals.”

Getting involved in continuous improvement through raising Kaizens is a key way that employees can play their part in Refocus. Refocus is allowing us to transform the quality, sustainability and profitability of our vehicles to ensure Halewood is in the strongest position to successfully rollout the electric architectures earmarked for our plant as part of the Reimagine strategy.

A huge congratulations to Darren, Callum and the combined T1 G7 and MP&L teams for this fantastic green kaizen!

View more
0
Halewood charity of the year 2018 - who will you nominate?