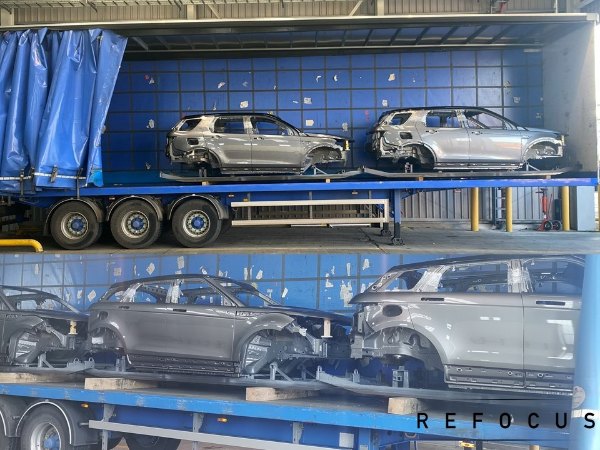 You know that saying two out of three ain’t bad? That’s something that doesn’t sit well with Barry Wilson, one of our Production Leaders in MP&L, whose Kaizen has meant we now have the ability to transport up to three cars in every one of our DHL trailers, instead of two.

Barry- who is our latest Kaizen of the Month winner-took it upon himself to challenge the norm and improve an existing process- which is key to Refocus. This will not only have a financial saving for our plant of over £200,000 but also supporting our sustainability commitments, as it will help drive down carbon emissions.

Barry's crackin' Kaizen came about after he completed an audit on one of the loading processes we use to transport kit cars (body shells) to the Midlands, which are then shipped to India where they are made into functioning cars for those markets.

Previously, Halewood would send out three trailers to transport a batch of six of its kit cars (two per trailer). However, when examining the interior of the trailers, Barry noticed there was still ample space at back, once the second car had been loaded.

He was confident that if adaptations were made to the orientation of the skid, which is the platform the car is loaded on to, he could fit an extra car on to the trailer- which is exactly what he did.

Barry said: “When cars are loaded onto the trailer, they have a solid platform between them. The skids sit end to end, which secures the unit and prevents damage happening to them, if there is ever a need for the driver to break sharply in transit.

“The challenge we had was that we had to reconfigure the skid so that we still had this platform between the cars, to protect them from coming into contact with each-other and prevent any quality issues.

“After speaking to the DHL drivers, they made me aware of a side shift function on the forklift truck which meant once the car was loaded safely on to the trailer, we could offset the skids and shift the second car sideways. This allowed us to interlock the skids and use a different part of the skid to create a smaller but still solid platform, thereby reducing the void between the cars and creating the extra spaced needed to get another car in."

He added, “For every batch of six cars we now send to the Midlands, we have taken a trailer off the road. That’s what is so brilliant about the Kaizen process- it makes you question what you know and ask yourself how it could be done better. The idea itself is simple but can only be achieved by challenging the norm.