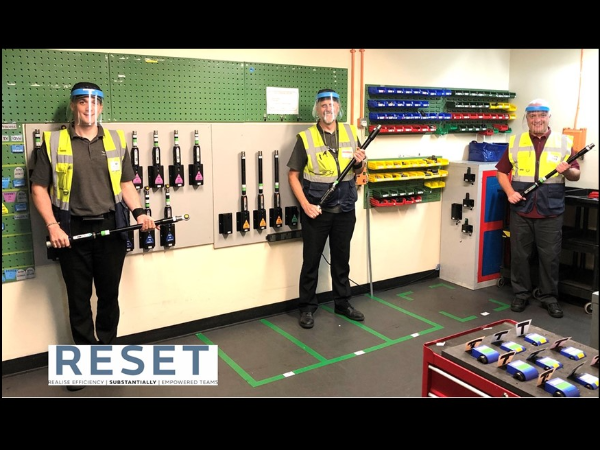 RESET: HALEWOOD HAS THE TOOLS FOR THE JOB

Many of us in Halewood are now working with a RESET mentality and looking for opportunities where we can reuse and recycle equipment to be as efficient as possible.

This is exactly what the Halewood ‘Torque Integrity Assurance Programme’ (TIAP) team were thinking when they brought in a new and significantly improved tooling and audit process, which meant that their old tooling was going spare!

The Halewood TIAP team including, Michael Burton, John Cox, Wes Miller, Barry Wilson and Gareth Fearn, wanted to find a new home for their old tooling which included 52 wrenches, 8 data collectors and 20 dynamic transducers, and our colleagues at the Castle Bromwich plant were more than happy to take it off their hands as they were in real need of this specific TIAP tooling!  The Halewood team had already built a great relationship with the Castle Bromwich team having previously supplied them with surplus older models of DataMyte torque data collectors when we upgraded our own Data collectors some years ago.  This has established a brilliant relationship between the plants and as a result of this the Halewood team were aware that the Castle Bromwich TIAP team were in need of this equipment.

The Castle Bromwich team told us, “We’re delighted with the new tooling and the cost saving, this will really help us to continue our TIAP audit processes and avoid potential maintenance and parts supply issues, that may be encountered with our ageing equipment.”

The Halewood team also provided training so the CB TIAP team could improve their inspection capabilities. This coupled with saving the CB plant the cost of replacing their own equipment, resulted in a staggering saving of £100,000.  The Halewood TIAP team have now caught the bug and are looking for other opportunities where replaced equipment can be used at other locations.

Area Project Leader Matthew Condliffe, told us, “This was very much the result of a concerted team effort over many years to bring in the new, significantly improved tooling and TIAP audit processes, which has allowed for the release of our old tooling and gauges for use by the CB team.”

10
Chris Lambeth: Getting a rush from saving people’s lives