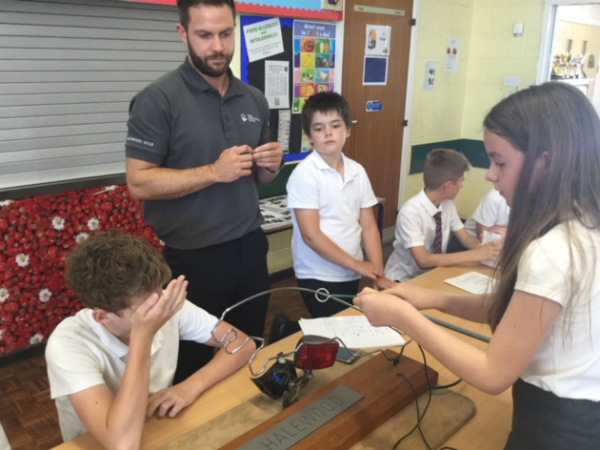 The school was planning a STEM (Science, Technology, English and Maths) week for sixty of their year six children (aged 10 to 11).  The Head Teacher asked if this is something JLR would be able to support with and after getting the thumbs up from his manager, Steven started getting the ball rolling to hold a one day STEM event at the school.

Steven contacted the Halewood EPBC (Education Business Partnership Centre) team, Danny Cassidy and Maureen McGuire who provided activities that he could do with the children.

Steven officially registered the project with Kate Birkenhead and made sure he had presentation material to show the children.

Steven also managed to get some of his PaintShop colleagues to support on the day, Andy Herod (Paint Production Leader) and Lewis Ferguson (Paint Launch Team).

On Tuesday 3 July they met 60 (very excited!) children in the hall and the day kicked off with a presentation about JLR. The children really loved watching the videos during the presentation especially the ones that had the Jaguar F-Type on!

After the presentation they completed the ‘5S Number Game’ with all the children.  A game that’s fun and helps to highlight the benefit of workplace organisation and 5S. The children really enjoyed this game and had fun trying to locate all the numbers during the 30-Second shifts that were set-up for them!

After the children’s break time they split up into four groups and they were asked to line up in birth date order right from the first birthday in January through to the last child’s birthday in December!  Lots of fun was had trying to do this and it involved lots of shuffling around the room and working together to get into the correct sequence in the shortest amount of time.

The children did a great job and managed to get in the correct sequence in just over four minutes!

The groups then took turns on the fuel robot cells, Jaguar game and logic cubes in addition to a lego truck activity that Andy Herod had developed, similar to the lean lego training that is delivered in the plant currently as part of the training strategy.

As the school day came to an end and it was clear that the children had thoroughly enjoyed themselves!

The children really seemed to grasp the material that the team presented, they asked some really thoughtful and insightful questions and made some excellent points around the challenges and benefits surrounding the future use of both electric and autonomous vehicles.

Steven, Andy and Lewis enjoyed their day at Hawarden Village Church School.  It was a challenge with a large group of 60 excited (and sometimes noisy!) children but it was a really great experience and one that they hope to repeat in the future.