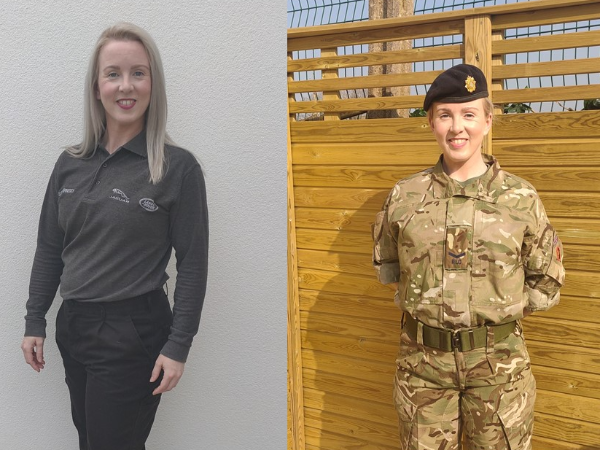 SOLDIERING ON: A REST IS OFF THE CARDS FOR OUR ARMY RESERVES MUM OF TWO, SOPHIA HENNESSY

With so many of our workforce stood down due to non-production at Halewood, we thought it would be perfect time to showcase some of the incredible things our employees get up to away from the shop floor.

This week, we spoke with Sophia Hennessy, a production operator on Doorline 5, in Trim & Final, who has been serving as a Non-Commissioned Officer (NCO) in the Reserves Army for the last 10 years.

Sophia said: “So many people at work are surprised when they find out I’m part of the Reserves Army, but it’s always been a huge part of my life as both my parents spent 35 years with the Reserves too. My mum was in the Royal Logistics Corps and my dad served with the Parachute regiment, so it’s quite the family tradition.”

Commenting on what she enjoys best about her heroic hobby, Sophia said: “It gives me the ability to do the things I wouldn’t normally do in my day-to-day life, or at work.

“I am actually a chef by trade and did my qualifications through the Army Reserves and it has allowed me to travel through Europe, take part in skiing championships- as well as all the hands-on military training which comes with it.”

“My colleagues at Halewood have always been really supportive of what I do with the Reserves. I’ve also been lucky as two of my former supervisors were ex members of the Armed Forces, so fully understood what was entailed if I needed to put in requests for days off for training camps and helped to accommodate this.”

Asked whether her solider skills come in handy on the shop floor, Sophia said: “Absolutely- we have to undertake so much intense training as NCOs, which keeps us physically fit and that’s ideal for a manual labour role like mine.

“I’ve been at Halewood for six years now, starting in Body in White and have taken on lots of different tasks such as weld turning- where you are effectively ripping parts off cars- so you need to be strong and being “army fit” makes shift work easier without a doubt.

“Equally, shift work also helps with my military training, as you do lots of early morning starts out on the range, carrying riffles for instance – so I’m used to being up at the crack of dawn with working early shifts at Halewood!”

But the training doesn’t stop there, as Sophia explained: “I also play rugby too, so outside of work, if I’m not at the barracks, you’ll find me on the pitch in some kind of scrum!”

Asked if she has been able to enjoy some rest these last two weeks during shut down, Sophia, said: “I’m used to being busy and soldiering on so relaxing doesn’t come easily to me.

“I’m also a busy mum to two young girls and am currently four months pregnant with my third baby- so needless to say a rest has been off the cards!”

“My colleagues at Halewood have always been really supportive of what I do with the Reserves. I’ve also been lucky as two of my former supervisors were ex members of the Armed Forces, so fully understood what was entailed if I needed to put in requests for days off for training camps and helped to accommodate this.”