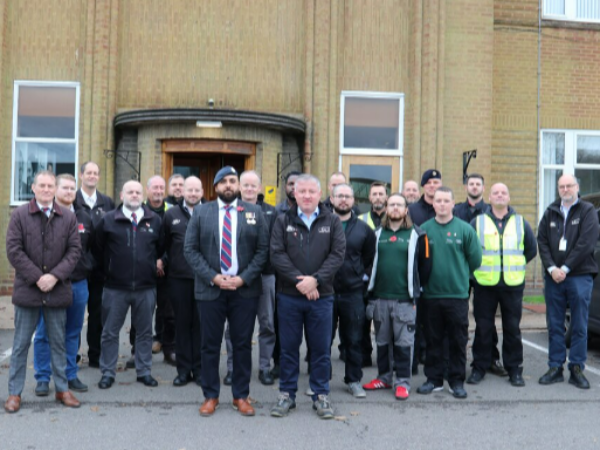 Members of the Jaguar Land Rover Armed Forces Community Network (AFCN) organised a Remembrance service last Friday to mark Armistice Day, the anniversary of the end of the First World War and to commemorate those who served.

Jaguar Land Rover’s Armed Forces Community Network is an employee-led network of Veterans, Reserves and allies who come together as a diverse network of people with a common interest. Members are not just those who have or are serving in the Armed Forces and people from all backgrounds, who support the Armed Forces are encouraged to join.

It was one of a number of services being held across UK Jaguar Land Rover sites and the AFCN were joined by associates and the Solihull Senior Leadership Team outside of Block 1 to observe the two-minute silence.

"Remembrance is an opportunity to pause and reflect on giving thanks and honouring the memory of those who gave their lives to defend our democratic freedoms.

Remembering others in this way does not glorify conflict. Instead, it aims to unite people across faiths, cultures and backgrounds when we take a moment to commemorate lives lost and celebrate the lives of people that have and continue to serve.

We participate in Remembrance to never forget. We remember friends, family members and acquaintances who have shown courage, unity and sacrifice during active service from the First World War right up to the present."

The service is just one of the way employees across the Solihull site are working in unity and coming together to mark such a significant day.

"I was very privileged to be able to represent our Network and lead the service at our Solihull manufacturing plant. This is a site steeped in military history, dating back to the Second World War when it produced engines for aircraft and tanks.

We held it outside Block One, with readings and poems synonymous with Remembrance, the laying of a wreath and finishing with a two-minute silence where we remembered the service and sacrifice of all those that have defended our freedoms and protected our way of life.

I’m proud to have served and fortunate to have support from my employer to be part of such a great network."

If you would like to learn more about the JLR Armed Forces Community Network, please get in touch at afcn@jaguarlandrover.com.

Here are some links if you would like to find out more: