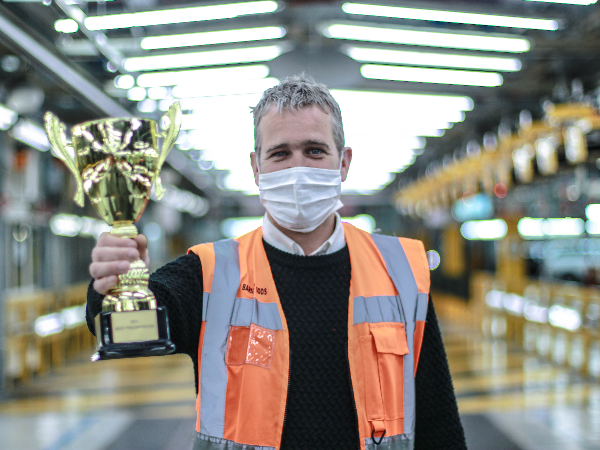 As teams across the business make strides towards transforming Quality, Solihull's Off-Track Area (OTA) team recently presented the improvements they've made to reduce vehicle diverts due to dirt contamination by 99%.

Barny Dodds, OTA Production Leader, explained how OTA has come together as one team to decrease the number of vehicle diverts from over 700 in one week to less than ten.

He said, “We were given the task of reducing how many cars are diverted in the OTA and the 12 Production Leaders in the team got together to understand what was causing most of them. We quickly realised cars being diverted due to being dirty was a big hitter for us.”

After running the numbers, the OTA identified that a whopping 700 vehicles per week were being diverted to be cleaned.

“Naturally, we know that vehicles which have been outside get dirtier than ones which come straight off the production line, but it was eye-opening to see the figures. We set about thinking about what we could do to make a transformation.”

Production Leaders, Group Leaders and Associates on the Validation (VAL) Line came together to make some simple and quick fixes.

“The Paint Quality team on the VAL have high standards and any dirt will be picked up and the vehicle diverted. We worked with Quality and Paint to build an additional amount of cleaning into the inspection process. If dirt was found and could be wiped or cleaned off, the team on the VAL line took on the responsibility.”, Barny explained.

This simple improvement has meant that hundreds of cars each week aren’t diverted and continue on to our customers, on time and to the Quality expected.