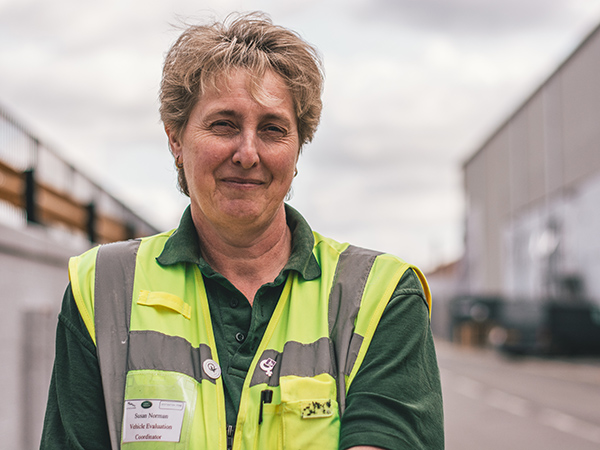 Speaking Out About TIC

Sue Norman opens up about how TIC has helped her overcome her fear of speaking in public and why the experience has filled her with a confidence she never knew she had.

Sue started out with the company at Solihull in 1994, before making the move over to Castle Bromwich in 2008.

Having always held production roles, three years ago she took a position in Plant Quality and now works in the Warranty Department.

During her working life, one of the things that had never really cropped up was the opportunity to stand up and present in front of an audience.

And if she’s honest that suited her just fine…

“It’s not like I actively ducked out of opportunities to speak in front of people but there was never really any reason for me to do it,” said Sue.

“I’m okay with speaking to people one-to-one but while some of my closer friends would be surprised to hear it, I actually see myself as quite a shy person.”

“I’m not sure exactly when it happened but the thought of speaking in front of groups started to seem daunting, I suppose I had developed a fear of it.”

So when her friend, Pam Henton initially approached her to join their Team Improvement Circle (TIC), Sue initially replied that it wasn’t for her.

“I wasn’t keen to join because I knew that it would involve standing up and presenting,” Sue continued. “I’d seen other teams preparing for last year’s convention and the thought of having to stand up and talk to a big room of people just freaked me out.”

However, recognising the knowledge and talent Sue could bring to the team, Pam wasn’t going to give up on her that easily.

“They asked me again, saying that they knew I could do it, plus I’d be doing them a huge favour as they needed an extra team member,” she recalled.

Eventually Sue decided to give it a go and joined ‘The Qualiticians’ circle.

“At first it felt more like I’d been coerced rather than volunteered,” Sue joked. “I didn’t know it at the time but that was the first major step in overcoming my doubts and gaining more self-confidence.”

Sue was quickly able to bring her experience and knowledge into their project and enjoyed helping the team progress through the TIC 10 step process.

She particularly enjoyed investigating the root cause of the problem and in doing so meeting people from other areas of the plant who she wouldn’t normally have reason to speak to.

“We made good progress on our theme that was all about improving the traceability of rework parts using the flags system,” said Sue. “I was actually really enjoying the steps and finding it quite straightforward to be honest.

“As we approached the final couple of months of the project it was suddenly time to starting practicing the presentation and that’s when the nerves began to creep back in.”

At this point with the big day looming the team were meeting twice a week and rehearsing their presentation over and over until it became a well drilled performance.

Sue had just gotten used to practicing in front of her team but when they were asked to present to the whole office just before the convention things stepped up a gear.

“I stood up, looked at everybody and was suddenly really nervous,” Sue recalled. “My voice went a little, my throat dried up and I just felt embarrassed stood up there with everyone watching me. After I’d said my bit everyone offered their encouragement, but I don’t think I delivered it as well as I knew I could have.

If anything, this practice had left her even more nervous of how she’d cope on the day.

The morning of the convention soon came and Sue found herself sitting at the Visitor Centre listening to the opening speeches with butterflies in her stomach.

Luckily she wouldn’t have to wait too long to get going as the Qualiticians were one of the first teams up to present.

The Studio suite is one of the biggest rooms used for TIC presentations and as Sue stood up at the front she found herself looking out into a packed room.

“The bell rang and the team started the presentation,” Sue continued. “I could feel my hands begin to tremble as I delivered my introduction and felt that dry feeling return to my throat.

“It was that moment when I could have easily let my fears get the better of me that I suddenly thought of all the work and preparation we’d done and how proud I was of our project and my teammates.

“So, I took a deep breath, a sip of water and feeling composed I started speaking. As soon as I’d got going I began to relax and the speech began to flow just like we’d practiced.”

The 12 minutes were soon over and Sue admits to feeling a huge sense of relief, but also a massive sense of accomplishment too.

“We had fantastic feedback on our presentation and we really proud of our project,” she continued. “At the end of the day we were disappointed not to have gotten through but overall we were on a high about how well the project had gone and what we had achieved.”

Since the convention Sue has felt much more confident which she says is showing in all areas of her life. When I asked for an example she replied.

“Well for a start there’s no chance I’d have volunteered to do this interview beforehand.”

Congrats to Sue and all the people who made the Castle Bromwich TIC Convention such a great event.