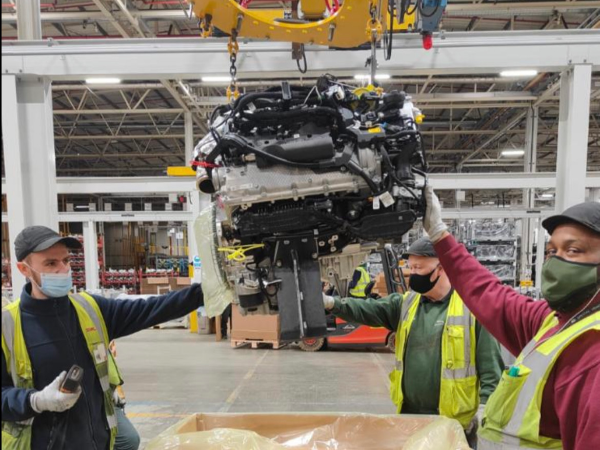 Bringing parts into the plant is a complicated business. Orders for very high value parts - such as engines - are placed in bulk, based on expected build volumes early in the year in order to get the best possible deal.

Bringing parts into the plant is a complicated business. Orders for very high value parts - such as engines - are placed in bulk, based on expected build volumes early in the year in order to get the best possible deal.

But if those volumes aren’t met, the business is left with the decision of whether to take the spare parts to recover volume, or lose out on parts that we could turn into cars for our customers.

Earlier this month, the MP&L team was faced with exactly this dilemma.

Ben Gray, Operations Manager for Material Planning & Logistics, explained: “The numerous parts shortages and Covid-19 difficulties we’ve experienced this year means Solihull hasn’t yet achieved its build targets. Because of this, our engine supplier recently told us that we needed to decide whether to take on the remaining parts we’d ordered, since they wouldn’t be able to fulfil the order later down the line.”

Rather than lose out on potential income, the MP&L and DHL teams decided to take on the challenge. The first problem they encountered was that the supplier was running out of the stillages they arrive in. So, in order to maintain a continuous supply, the team needed to find a way to get the engines out of their containers and into something else – and they needed to do it fast.

The answer they found was to decant the engines into new packaging temporarily. This meant stillages could be freed up and returned to the supplier, ready to be restocked.

After creating some bespoke packaging with the help of external suppliers, the DHL and MP&L team set up shop in Block 63 – establishing a small night crew to start processing the 250 engines due to arrive at the plant over the next 7 days.

Ben said, “We went from no people, no tooling and no packaging to a full-on operation by the start of the following week. It’s been a real show of can-do attitude from both teams – MP&L and DHL. Nobody said we couldn’t do it;  everyone just met the challenge head-on. Working as one team, they got hold of the right tooling, volunteers set up a night shift and those on the day shift took on more work to accommodate the new operation.”

The project was a huge success, avoiding more than £2.25 million in costs to the business. So successful, in fact, that MP&L have now established a process to decant the engines off-site going forwards.

What an amazing job by MP&L and DHL teams, showing what we can do as #oneteam. Have you got a Solihull shout out for your colleagues? Let us know at solihull@jlr-colleaguecommunications.com.

Nobody said we couldn’t do it. Everyone just met the challenge head-on.