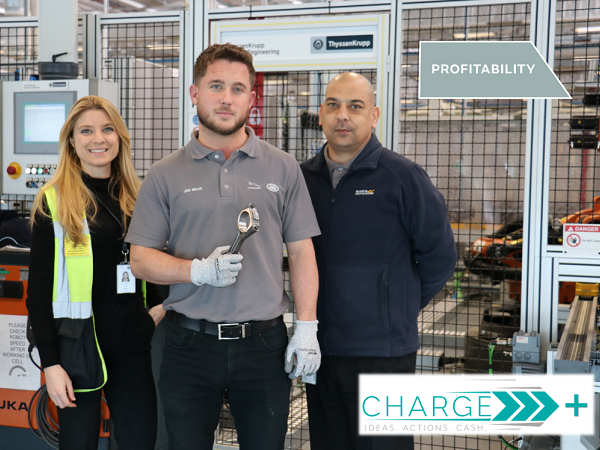 TEAM FROM THE ENGINE MANUFACTURING CENTRE WAVE GOODBYE TO PLASTIC PACKAGING WHILST SAVING £145,000

The Engine Manufacturing Centre’s employee of the month Jon Brady was recently recognised by his colleagues after some fantastic work reducing plastic packaging across the EMC.

With both the Charge+ Cost Challenge and the need to protect the environment in mind,  MP&L sought out ways to reduce plastic packaging across the site and their most notable success involved the conrod part in the petrol hall.

A conrod is a hugely important part that connects the piston head to the crank on the engine. This is crucial because the motion created through the conrod rotates the crank … and without this, the wheels on the car won’t spin!

Jon’s team noted that each conrod was royally packaged; it came in a bespoke plastic tray, a plastic bag AND a rented CHEP box. It was packaged in this way to ensure quality, to protect it and prevent rust.

After working closely with Purchasing and the new supplier, the MP&L team understood that the supplier previously used to supply parts for a separate line at the engine plant. And there were reusable trays which they could now utilise for the conrods.

After working closely with the supplier, a new packaging method was agreed on. Now, the conrods come to us in just a reusable tray with no plastic bag or box needed.

Not only has this led to a reduction in more than HALF A TONNE of plastic that no longer has to be used but it has saved us a whopping £145,000 per year.

Solihull local Jon said: “It was a pleasure to work on this project with the others within my team, in our joint fight to save to planet, reducing plastic use is hugely important to us all and it was great to play a part in this.”

It was a pleasure to work on this project with the others within my team, in our joint fight to save to planet, reducing plastic use is hugely important to us all and it was great to play a part in this.