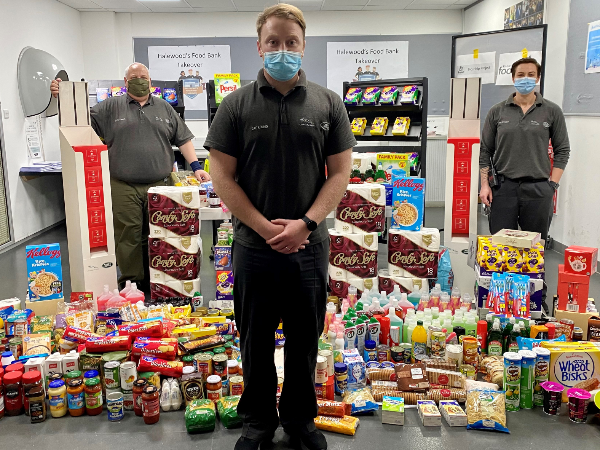 Before Easter shut down, we hosted the first Halewood Foodbank Takeover of 2021, where employees rallied round and donated more than 2000 food and essential items to Knowsley Foodbank, in an extraordinary team effort.

Knowsley Foodbank has been feeding up to 2000 people a week, since the UK went in to its third national lockdown, so these donations will help to feed many families and vulnerable people in our local communities- so we should all feel very proud of what together, as a workforce, we have achieved.

As well as food, employees also organised collections in their teams and we received over £200 in cash donations. This will be used by Knowsley Foodbank to buy emergency supplies for people using its services that have specific needs or requests.

James Apter and his colleagues from the clinch line B shift, in Paint, were one of those teams, who donated the proceeds of a lockdown weight gain collection they started in February, to stop each other from reaching for the fridge every time they passed it!

James said: “At the start of every week, everyone had to weigh themselves, and if they put on a 1lb, they had to put a £2 donation in to the tin.  What we thought would be a little bit of fun to lighten the mood, turned out to be quite competitive and everyone became really focused and started to refuse takeaways, chocolate and other sugary treats, especially the day before or on the day of the dreaded weigh in!

“We all made the unanimous decision to donate the proceeds to Jay Round, from Trim and Final and Kim Challis, from Underbody, to go towards the Halewood Foodbank Takeover, for all their hard work and dedication to the Knowsley Foodbank partnership.

James added: “Also, just for the record, the £150 raised was not made up completely of fines- as we all did very well in the end! The majority of it was actually donated by associates on the sealer deck, clinch line, denib line as well as the paint shop office.”

Community is at the heart of everything we do at Halewood and this is the first of four foodbank takeovers planned for 2021. As Knowsley Foodbank is marking its 10 year anniversary this year, we have also set our workforce the challenge of donating a minimum of 10,000 food/essential items by the end of the 2021 and with 2000 collected already- we are off to a good start.

Speaking about the Halewood Foodbank Takeover, Toni Bell, manager at Knowsley Foodbank said, “We were blown away by everyone’s support at Halewood and can’t believe how generous people have been. There were lots of Easter Eggs for the kids which helped to put a smile on so many little faces.

“The last few months have been really tough for people using our services as many have been self-isolating or unable to work and at one point we were feeding up to 2000 people.

“We are worried the situation is only going to get worse as the furlough system comes to an end and more people will end up losing their jobs and need to access our food bank. The continued support from Halewood employees, with the additional takeovers planned for this year, will help to make a real difference, take some of the pressure away so we can ensure that nobody in Knowsley goes hungry.”

The next Halewood Foodbank Takeover will take place ahead of the May shutdown and dates and timings will be shared with employees in the coming weeks.

Please remember there is also permanent donation point for Knowsley Foodbank in the Trim and Final People Centre so employees can continue to donate to the food bank throughout the year.

6
Journalists give their first impressions of Jaguar’s performance SUV