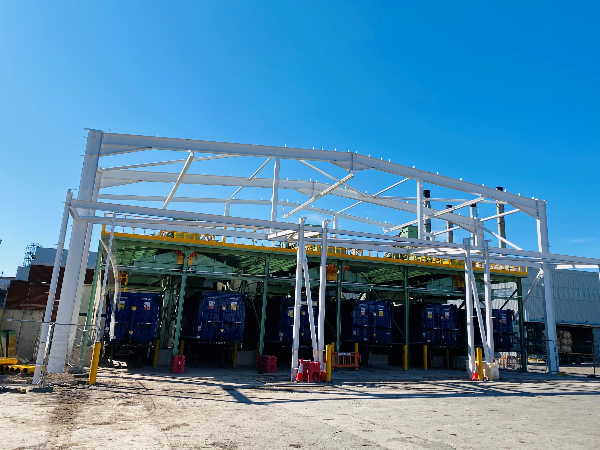 THE BIG MOVE: WE BRING YOU THE LATEST UPDATE ON THE BALER HOUSE PROJECT

With lockdown restrictions being gradually relaxed across the UK, most of us spent the latest shutdown socialising outdoors with family and friends and tucking into chocolate eggs- however a holiday was off the (Easter) cards for our Facilities team.

Instead they have spent the last two weeks completing the final, critical stages in the Baler House project, before they officially hand it over to the construction team, later this week.

This-long- standing project – a £1.4m fit for purpose building - will eliminate noise from the handling of recycled metals on site in the Press Shop and demonstrates Halewood’s commitment to being a good neighbour, after engaging with local residents and Knowsley Council over noise concerns and putting a plan in place to provide a complete solution to the issue.

As part of this latest stage, the Facilities team relocated the final aluminium scrap metal conveyor to its new home, on the site of the soon-to-be built Baler House, and connected it up to the automatic wagon conveyor, so it was fully operational, ahead of today’s start to production.

Now that this is complete, it means that the Construction team is able to begin work on the building phase where they will encase all three scrap metal conveyors within a new building, which will stop scrap metal noise escaping outside the plant perimeter.

Before the project started in July 2020, scrap material would exit the plant via a chute on the Press Shop roof, dropping straight into a container below, a process which could be heard by local residents and became a cause for concern.

Speaking to On Track, Ian Kilgallen, lead facilities project engineer, said: “The Baler House will add real value to our business by making the scrap metal process more efficient but also shows how Halewood is fully invested in its relationships with its neighbours as it will provide a complete solution to the ongoing noise concerns from the Press Shop- which will also be hugely beneficial to our own employees who are exposed to the noise day in, day out.

“It’s a huge milestone for the team to be able to hand over the project reigns to construction after working tirelessly for months so that all these phases could be completed, which were production critical and needed to be done over the shutdown periods.

And the benefits of the project don’t stop there as Gavin Clarke, an electrical engineer in the Facilities team said, “We manged to cut the original quote for the Baler House project by two thirds, simply by realigning the scope and focusing on value for money, making use of the assets we had, rather than buying in new materials which we didn’t need.

“That’s why we have reused 90 percent of the original scrap metal conveyors and only replaced a small number of parts, as it was the right thing to do for our business not only from a cost perspective but also for the environment as we look to explore more sustainable solutions for our factory.”

Ian Kilgallen, added: “This wasn’t just a Facilities job, it was a huge cross functional effort, where teams came together to deliver something everyone at Halewood can feel incredibly proud of. I’d like to thank the site safety teams, Press Shop maintenance teams, who supported us through the shutdowns. A special thank you also to William Morris, from Manufacturing Infrastructure, Matthew Scott, T&PPG plant engineer, Joe Halliday from Manufacturing Engineering Safety and the EMR team- our sub-contractor onsite for metal scrap processing and removal.

Dan Ford, senior manager for Mechanical Engineering said: “I’m incredibly proud of all the teams who have helped us to get to where we are today. They were testing times and tight deadlines, with many people putting in 12 to 14 hour days, battling extreme weather conditions, just to get the job done so there was no impact to production

“They never dropped a beat and I’d like to thank everyone involved for the commitment they have shown to Halewood, from the Communications, Purchasing and the Operations teams- it really has been a cast of thousands to get it done.

Dan added: “As we drive forward with the Refocus transformation programme, we need to continue to be more self-sufficient as a business and draw on whatever resources we have, wherever they may be and this project is an excellent example of that and the importance of cross functional team work.”

“It’s a huge milestone for the team to be able to hand over the project reigns to construction after working tirelessly for months so that all these phases could be completed, which were production critical and needed to be done over the shutdown periods."