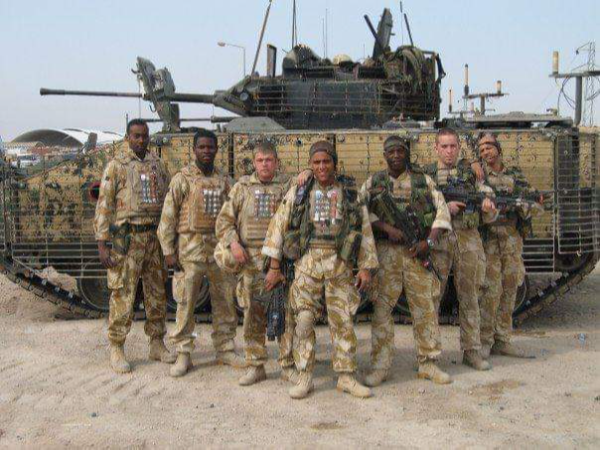 On Armed Forces Day, we caught up with Launch Engineer, Ricardo Morrison who shares his story about joining the British Army at just 19 years-old.

Ricardo Morrison was born in Spanish Town in St. Catherine, Jamaica and at 19 years-old he came on a holiday to the UK to stay with his mum for the summer holidays as she was working in Birmingham.

Little did he know then that his life was to change forever. What was supposed to be a four-week holiday turned in to something much more than that when he decided he was going to join the British Army.

We asked the now Birmingham boy what the process was like, he said: “I went to the careers office and once I’d applied, I had to undergo a selection process of fitness, character building and medical.

"It’s here where you’re deemed suitable or not to be selected for the army. And, I was, and, following this I pledged allegiance to the Queen and then the training started.”

And, Engineering had always been an aspiration of Ricardo’s, even back then as he applied to do Engineering in the Army, but a few weeks before his training, he was placed with the frontline team.

He then moved to Scotland to do his training and describes this as where the hard work really started- both mentally and physically. He reminisced: “We weren’t allowed to go home for the first three months, and I had a girlfriend in Birmingham at the time.

"It wasn’t like now where we have mobile phones, so we used to send letters and photographs to each other in the post.”

Following his training, Ricardo was placed in the 1st Battalion Staffordshire Regiment and it was all systems go from there. At 20 years-old, he went to Kenya where he carried out training and was field testing weapons. We asked him what it was like for him being so far away from home in his early twenties, he said: “It was a bit of an adventure for me and I loved the opportunity to experience and visit Africa.

"What really surprised me and sometimes surprises others is just how diverse the British Army is. I had people from all over the world in my Regiment and many of them became friends for life.”

At 20 years-old he spoke about being humbled by meeting Kenyans and learning about their lives and their struggles when he was sent over there. He also enjoyed living in the wild out there and says that most nights, where him and his fellow soldiers were staying, it would be taken over by baboons in the evenings!

But despite the pleasantries, the team had a mission; they were involved in live firing of weapons and simulation exercises to put weapons through their paces before they were rolled out to the British Army.

Then, when he was 21 years-old he was deployed to Iraq. He describes his emotional rollercoaster with fearing death, he said: “When I was first deployed to Iraq, I started questioning myself about why I feared death and I realised that the main fear I had about dying was that I didn’t want my family to suffer or grieve. But, once I got over that and came to realise that, as soldiers, we were there to protect and preserve lives- at any cost- I stopped fearing death.”

He was on a peace keeping mission in Iraq and describes his role where he spent a lot of time with civilians as ‘winning the hearts and minds of the civilians’ whilst he was on patrol. But, at times, he found himself in a number of hostile situations where riots would take place and he has vivid memories of Soldiers almost being burnt alive in Basra.

Ricardo was mainly in charge of weapons on the tanks and describes one occasion where a fellow solider in his tank was attacked and set alight, it was Ricardo that freed him as his exits were blocked and without his intervention, this man would not be alive today.

For the next 18 months, Ricardo continued on his deployment in Iraq and was well known for his involvement in Army Boxing, even competing.

But, at 24 years-old, following a serious knee injury, Ricardo hung up his boots. He decided he wanted to become academically educated and pursue his teenage dream in Engineering. It was then he moved back to Birmingham and got his degree in Mechanical Engineering.

Following his graduation in 2013, Jaguar Land Rover warmly welcomed the new recruit in 2014 into a Project Engineering role. And, he’s still with us today as a Launch Engineer within Product Engineering.

He idolises his four children and his partner who are all extremely proud of him.

So, as we mark Armed Forces Day, we remember the huge sacrifices that people like Ricardo made for the freedoms that we all enjoy today.

Thank you to Ricardo for sharing his inspiring story.

As Soldiers, we are there to protect and preserve life.

View more
3
4X4 IN SCHOOLS TECHNOLOGY CHALLENGE: A WORD FROM THE WINNERS