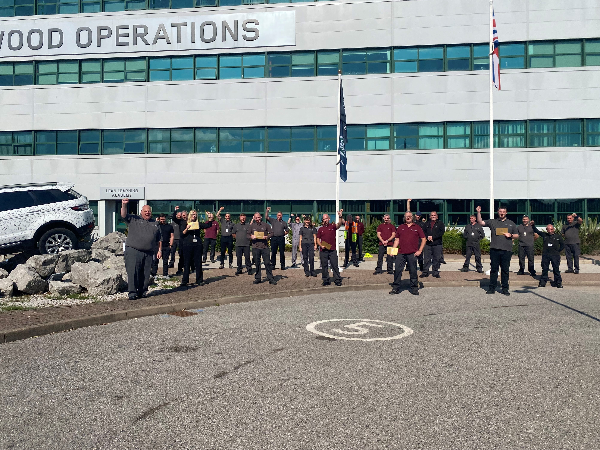 Last week, members from Halewood’s 26 local TIC circles, came together under one roof, as we unveiled the names of the ‘Fantastic Five’ teams being fast-tracked to the UK Recognition Activities, this autumn.

The circles were greeted by members of the Halewood leadership team and TIC committee before Operations Director, Trevor Leeks, took to the stage to open the five golden envelopes, as part of the big reveal!

Due to social distancing restrictions within the business, we were unable to get all 125 circle members safely together in one space, which was why each team was asked to nominate a representative from their circle to attend the event on their behalf.

We can now confirm that going through to the final stages of the 2021 TIC cycle are:

The Halewood Fantastic Five will form part of the 32 top circles who are progressing directly to the TIC UK Recognition Activities later this year. This will include a JLR off-road driving experience at Eastnor and they will also get the opportunity to present their TIC theme to a member of the Board of Directors.

Speaking about their success, Terry Callaghan, from Separated for Good, said: “I’m made up and surprised. Everybody has been asking how we got on since we did the local convention in June and I honestly didn’t expect we would get through!”

Abbigail Waldron, from Flash Gordon, said: “I’m over the moon, I can’t wait to go back and let the others know- I’m sure they will be ecstatic- what a surprise!”

Karl Miller, from The Improvers said: “I’m blown away- getting to this part in the process shows how good our idea was, as we were up against some stiff competition, so I’m very proud of the whole team.”

James Mulholland, from J.I.T Happens, said: “I’m completely amazed. We had no idea how we did, so I feel lost for words! TIC is such a great process, and it was the first time I had worked with Jo and Bradley and we’ve got a really good bond now and work really well together.”

David Farrell, from Press Up, said: “Like the other teams- I feel a bit shocked but I was happy with how we performed at the Local Evaluations in Halewood and the journey we have been on. We’ve all took a lot from that and never imagined we would get through to this stage- I’ve just WhatsApped the team and they are buzzing!”

Trevor Leeks, Operations Director at Halewood and TIC Chairperson, said: “I genuinely mean it when I say that all the teams in my eyes are winners. Against the odds, despite all the challenges we have faced within the business these last 18 months, they have completed the process and presented to our judges. The effort across the board has been phenomenal and I am proud of everyone- well done.”

Our Fantastic Five are now geared up to fly the flag for Halewood at the TIC UK Recognition Activities this autumn, which we will be showcasing in Team Talk over the coming weeks- so watch this space!