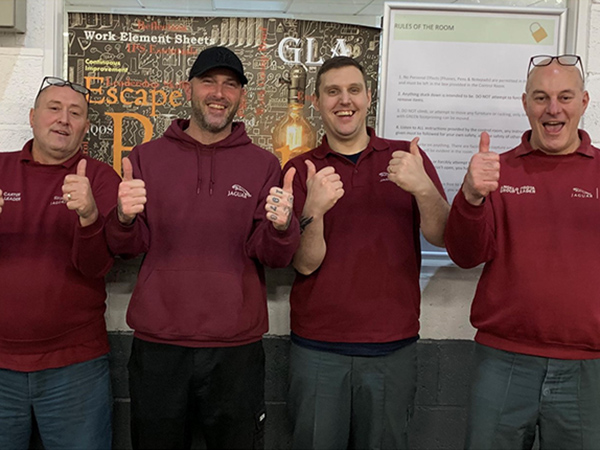 Team of four Castle Bromwich Group Leaders become first to make it out of the GLA escape room.

John Carter (BIW C Block), Scott Bassett (OTA A1 /A2), Michael Cooke (Launch) and Angelo Prota (D Block OTA) are names that will go down in Castle Bromwich folklore as they secure the bragging rights as the first team to make it out of the Group Leader Academy Escape Room.

Designed to test GL’s by getting them to apply all the information they’ve picked up on the course, the scenario has to date seen over 120 GL’s attempt their escape but ultimately all until now have run out of time.

This top team of champions however made it out by the skin of their teeth with less than 5 seconds remaining on the clock, making them the first at Castle Bromwich to do so.

“The escape room session of the academy is always one of the most competitive and fun parts of the GLA course,” said Gary Thompson, IPS and GLA Coach. “The scenario has been designed to test out all the concepts we have taught them during the course and without giving too much away, it covers things like work group stations and 1 in 50th mapping.”

The escapees are given an hour to make their exit and are allowed four ‘andon’ calls for help, which they can increase if they’ve performed well over the course.

“We were beginning to think that we’d made the escape room a little bit too difficult,” added Deanna Moran, fellow IPS and GLA Coach. “The tension at the end as the final few seconds ticked away was something else but the team pulled it together and managed to make it out in the nick of time.”

Course activities include leadership coaching, process what’s and why’s, risk assessment training, communication, presentation and briefing training as well as a host of hands-on activities to put their skills into practice, including the escape room.

At the end of the two weeks, Group Leaders are asked to return to work and complete 12 modules of activity which asks them to apply their learning with their real-life teams.

Congratulations to all those who have recently completed the course.