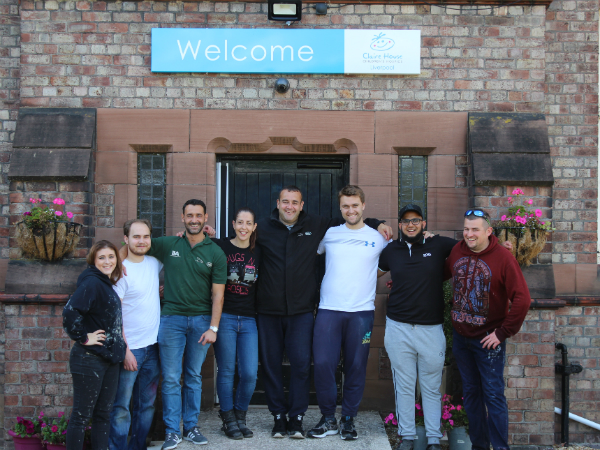 THE HILLS ARE ALIVE WITH THE SOUND OF CLEANING

A group of volunteers from Halewood Manufacturing Product Integration got their hands dirty recently by helping Claire House get their new house in order in Liverpool.

Claire House Children’s Hospice, which has been based in the Wirral for over two decades, has set up a second home in West Derby at a former monastery in West Derby. The four and a half acre site will give the charity a much-needed base in Liverpool, adding to their hospice in Bebington, which is already at capacity and difficult to reach for many parents with more than half of the children who use it coming from the Liverpool side of the Mersey.

When our MPI team arrived they couldn’t resist a tour of the monastery with all its original features in the bedrooms, chapel and grounds. The stunning property was given to Claire House by the Carmelite Order of Nuns - a silent order - who wanted to leave their home to a good cause.

Once the team had (quietly) taken in the sights the first job of the day was the main entrance, which needed a little TLC to give people a really warm welcome as they arrive. The team cleaned the hanging baskets, weeded and cleared away debris and fallen fruit from the trees in the grounds.

They then moved on to “The Den” which is as exciting as it sounds - an imaginative play area where children and their siblings can have fun and get up to mischief!  It even comes with its own wishing tunnel, party cabin and wheelchair accessible zip line – so there’s magical adventures for all.  The team were putting down some anti-slip decking strips which we’d donated to keep the area safe.

Claire House run an annual event every September in Sefton Park known as ‘Splash Dash’. Which is a fun run with powder paint. The team were also tasked with cleaning the 500 buckets they use during the day which saved Claire House £500 as they didn’t have to replace them with new ones.The money saved can now be used for renovations and helping families who really need it.

The whole team had a fabulous day helping Claire’s House and were really inspired by the amazing work this great charity does, if you’d like to support them why not get involved in this year’s Splash Dash?  Full details can be found here - www.splashdash.org.uk/sign-up/.