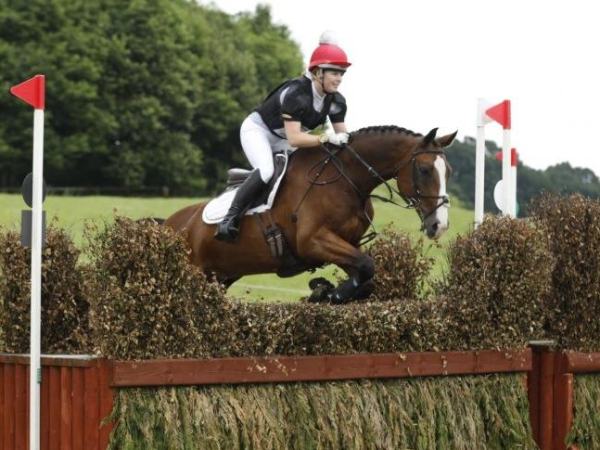 Whilst many of us have been enjoying time off with friends and family over the summer shutdown-a rest was off the cards for Halewood's Gabby Macdonald, who was busy competing at the British Eventing National Grassroots Championships, at Cholmondeley Castle!

This is a prestigious national event- made up of three phases, including dressage, show jumping, and cross country. However, there was ‘neigh’ stopping Gabby and horse, Laurence and despite competing against 40 of the country’s top grassroots riders, they managed to trot their way into a top ten place!

Gabby said: “Taking part in this championship has been a huge ambition of mine but to place tenth was just a dream come true and beyond my expectations as this is the first time we have competed at this level.

“It was a very close competition with only three marks between the top 10 riders, who are amongst the best grassroots riders in the country. Laurence and I posted a dressage score of 33.0 and backed that up with a faultless jumping performance, going double clear (where you incur no penalties to your score) inside the time in both the show jumping and cross-country.”

Asked how she finds managing her love or horses around her role as a fifth year ME Degree Apprentice at Halewood, she said: “If I’m not at work- I’m in the stables. After I’ve finished my shift, I go straight to see Laurence and am sometimes there until 9pm at night- especially if we have a show to prepare for.

“It’s a lot of hard work but I wouldn’t change it for the world and all my teammates at Halewood have been incredibly supportive, especially in the run up to a show if I need to take leave to compete. The support and flexibility of my colleagues enables me to carry on competing and doing what I love.”

And it’s not long until Gabby is back on the saddle again as she is taking part in another British Eventing show at the end of August at Llanymynech Horse Trials and following her incredible recent performance, is even moving up a level in the competition-great work Gabby!